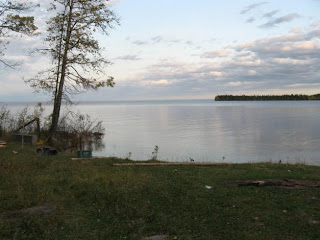 A 4,600-year-old burial has been discovered in a remote corner of northern Canada – and could hold the key to how ancient Canadians lived. The remarkable find has been made at the mouth of the Bug River, near Big Trout Lake, Ontario. Today the region is home to the Kitchenuhmaykoosik Inninuwug First Nation, an indigenous tribe numbering around 1,200.
The discovery was made by First Nation fishermen as water levels fell at the lake, exposing the burial. The site is currently being handled by an archaeological team from Lakehead University, Thunder Bay. The discovery is particularly rare as Canadian ethics laws largely forbid excavations.
The skeleton discovered is that of a man aged in his late-30s or 40s. Around five-and-a-half feet tall, the man had a “very, very robust muscular build,” according to team leader Prof Scott Hamilton. The man would have held high status in his day thanks to a seemingly formal burial. “There's a flat slab of granite that's associated directly with the bones,” adds Prof Hamilton. “It looks very much like a purposeful grave. We'll be taking a closer look at the stone as part of our analysis to see if we can find any evidence of function.”
Another aspect due further study is a red ochre found on the man's bones and nearby sediment. It is thought the colour was added to his body before burial, a practice seen throughout the world, including prehistoric North America.
The man lived at around the same time the Great Pyramids were being built in ancient Egypt, and great cities such as Babylon were popping up across the Near East. Yet life at Big Trout Lake, where temperatures can plummet to -30°C, was very different. “These folks are adapted to the kinds of resources one finds in the boreal forest,” says Hamilton. “These resources are highly seasonal in their availability – and the season of comparative plenty is often spring, summer and perhaps early fall.”
Isotope testing has so far shown that the man enjoyed a fish-based diet, with a side of hunted land mammals such as caribou (reindeer). The Spartan lifestyle, and migratory nature of food, meant Ontario's prehistoric tribes travelled huge distances in small numbers. “The winter seasons are generally a time of some scarcity and hardship as spatially concentrated food disappears,” says Hamilton.
“That means sub-Arctic people, in order to survive year in, year out through generations, have to have a seasonal cycle that’s highly mobile,” adds Hamilton. “They can place themselves on the landscape where they can predict resources will be available and follow the seasonal cycles of availability.”
It may seem an ancient lifestyle, but Canada's tribes have followed this ancient practice for millennia. “The past is very recent in the far north,” says Hamilton. Even the appearance of Europeans in the 17th century did nothing to alter the indigenous way of life, and Hamilton says prehistoric traditions are still alive today: “(The First Nation) may be gathering and harvesting resources with European technology but they’re (still using a) fairly significant amount of traditional technology – canoes, snowshoes, footwear, clothing.”
“What we see is this really interesting mix, an admixture, of traditional technology and the incorporation of new technology to practice a traditional life.” First Nation Chief Donny Morris insists the man will be reburied after tests are completed, in the traditions of his forebears. Yet it seems we'll learn a lot more from him yet.