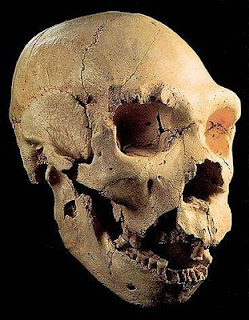 The Atapuerca Sierra was declared Heritage of Humanity due to the large number of palaeo-archaeological ramains hidden in the bowels of the earth. Groups of Homo antecessor, heidelbergensis, Neandethal men and Homo sapiens walked, slept, harvested and hunted in the beautiful areas of wich composed. Today it is one of the main sources of remains of human activity in previous perods of the worls, on wich important investigation activities are being carried out that is allowing a more in-depth knowledge of the evolution of the human species trough discoveries associated with it.
The interior of the Atapuerca Sierra is a veritable rabbit warren of chsms and galleries. This characteristic and the fact of being found in the middle of a natural corridor, encouraged the appearance of animals and people from remote ages and its exceptional conservation over thousands of years, have made this enclave a unique place in the world.
At the end of the 19th Century, an English company installed a railway line for transporting coal that joined the mines to Burgos. The route divided off an area of the Sierra where it passes through Atapuerca leaving part of the interior exposed. This artificial narrow pass is what is known as the Railway Trench and the consequence of this was the casual discovery of one of the deposits.
The work on the deposits is not only excavating. Once the material has benn recovered, its processing is long and complex; cleaning, restoring, …, but work is also carried on in other environments: pollen that is hundreds of thousands of years old is recovered, the variation in the magnetic field of the clays in analysed, physical and chemical process are performed to get to know the age of objects and levels togother with an endless list of investigative processes that we considered in the visit, that started in the Sima del Elefante.
This is the first site in the itinerary and the one that have the olsest remains of human occupation in the entire sierra and in Western Europe: bones with cutting marks and tools over a million years old.
The Galeria deposit worked as a natural where, more than 300.000 years ago, horses, deer, bison and rhinoceros were trapped. But tools used by hominids (Homo heidelbergensis) for making use of those animals were also found in Galeria.
Remains beforing to a species documented for the first time in the world were found in the Dolina deposits wich were baptisted with the name of Homo antecessor. Furthermore, the remains of this European “explore” showed the practice of cannibalism more than 800.000 years ago.
All seems to indicate that the hominids who inhabited the Sierra 400.000 years ago (Homo heidelbergensis) accumulated their dead in this cave. Men, women, children, were thrown into the cave, one after another, forming one of the greatest paleontological deposits in the world.
Craniums, pelvises, phalanxes, vertebrae, tibias, even the tiny bones of the ear. It is all here, in the Chasm of Bones.
Apart from those of the Railway Trench, there are many other sites in the Sierra: Mirador, Portalón, Cueva del Silo, Hundidero, Sima de los Huesos,… Some belong to more recent moments of Pre.history, such as the Galeria del Sílex: 3000 years ago, this cave was occuied by people of the Bronze Age and used as a sanctuary. Vases and animal bones were broken up intentionally and dispersed inside it forming part of a complex and symbolic puzzle.
Symbols were also found on the walls and on some pieces of pottery. Finally, the cave was closed accidentally sealing its inner part that remained intact up until the present day.
The Atapuerca park is a space for discovering Pre-history in a dynamic, participative manner. A space where we can see live how was made, how flint was flaked rope making, painting. Re-created with environments from different periods, the park is the perfect complement for visits to the archaeological sites.
Dedicated to the paleontologist Emiliano Aguirre, father of the scientific excavations of Atapuerca, the Aula is one of the centers for receiving visitors to the Sierra. Its show cabinets have somo original pieces, replicas of tools and human fossils, models, apart from panel explaning the keys of the site.
Originally located in the National Museum of Natural Sciences of Madrid, this shows archaeological reproductions and original pieces from the deposit, stage designs with real scale figures of homnids of the Sima de los Huesos, models, audiovisual material and other multimedia elements. Atapuerca a million years is the largest permanent exhibition on Atapuerca.
The Cueva del Compresor is at the end of the Railway Trencht. It is a subterranean quarry from the start of the century, intended for the extraction of limestone blocks. Altough developments of the original cave can still be seen, the extraction activity transformed it into a large chamber, at present converted nto an interesting itinerary with audiovisual resources and scenes of hominids.
The deposits od teh Atapuerca Sierra (Burgos), were declared Heritage of Humanity by UNESCO in 2000.