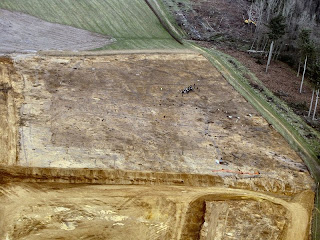 Archaeological fieldwork carried out in advance of mineral extraction unearthed a group of pottery kilns dating from the late Roman period. This is one of several discoveries revealed by Thames Valley Archaeological Services (TVAS) during the course of quarrying in the area and includes an important Late Palaeolithic site just to the south at Somerley.
The New Forest has long been recognized as an important centre of pottery production in Roman Britain, its products being widely traded throughout the province. It is, however, a somewhat surprising location for site director Andy Taylor and his team to find such an industry. The main drawback being the lack of locally available clay suitable for potting. It appears that the supply of timber for fuel was more important than the lack of clay.
The pottery produced here is distinctive for its shiny appearance, which seems to have been intended to imitate metallic vessels (silver or pewter); and even the shapes also seem to copy metal vessel shapes, such as the very typical indented beaker
The industry flourished in the later part of the Roman period, between around AD260 and AD370. Previous kiln sites for New Forest ware have been found at Fordingbridge and Rockbourne, both to the north up the Avon valley.
The opportunity to excavate large areas around the kiln sites is of particular importance as it will provide information about how the industry was organized. For example:
All of these questions require the excavators to adopt a landscape approach to analysis, rather than focusing narrowly on the kilns.
Four kilns have been identified so far in the Plumley excavations, with there being another possible two which are yet to be investigated.
The kilns consist of a simple pit, with a clay lining that would originally have extended as a dome over the top. A suspended floor, punctured with flues, divides the ware chamber above from the firebox below. Unfired pots would be stacked within the ware chamber and heat applied through a flue, which fires both the pots and the clay lining of the kiln itself.
To reach the high temperatures required to create the glossy finish of these wares, enormous amounts of fuel had to be burnt and the fires constantly tended. Once the firing process was complete, the dome had to be broken open to reach the finished pots, so in effect each kiln superstructure was only used once. However, the same pit could be reused for may firings, each time leaving a layer of spent fuel and sometimes creating laminations within the clay lining that reveal the repetition of the processes.
If a firing goes wrong, some pots will warp or not fire fully, and even if the kilns had not been found, these ‘wasters’ would be a clear indication of a pottery production process taking place on the site, as since they cannot be sold they will invariably be discarded close to the kiln itself.
The site contains several other Roman features, including enclosures and a possible post-built structure, presumably related to the pottery works. In addition, a Bronze Age round barrow (ring ditch) was discovered along with a post-built roundhouse.
While the excavations themselves were still ongoing an open day was held for the Avon Valley Archaeological Society. During the open day Jo Crane took a series of aerial photos from her plane showing the layout of the archaeology and the Society being given a guided tour!