A temple of Roman goddess Nemesis, discovered in Alba Iulia 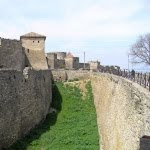 A temple built by Roman legions at the end of the second or start of the third century has been discovered within the Alba Iulia citadel, reports Mediafax news wire. The intricate detail of this discovery consists in the fact that a sacred temple was rarely, if ever, built inside a Roman legion camp.
The discovery was made during improvement works developed at the archaeological site of the Alba Iulia citadel. The temple is part of the Gemina Legion 13 camp and is believed to have been built by the soldiers, as an offering to their patron. The temple comprises a votive altar, a marble plaque representing a gladiator and a marble statue of the goddess, reports Mediafax. Several other traces of the Roman legion camps were also discovered at the site.
Nemesis was the goddess of revenge for Romans, being also regarded as the patron of gladiators and soldiers.