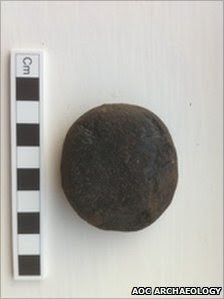 The site of one of Scotland's most important mainland broch settlements may have been home to early people for up to 1,000 years, evidence suggests.
Archaeologists and volunteers have uncovered what could be the remains of walls dating back to 700 to 500 BC at Nybster in Caithness.
Andy Heald, of AOC Archaeology, said further investigations would need to be made to confirm the structure's age.
Evidence of possible Pictish and medieval occupation has been recorded.
A key feature of the site are the remains of a massive stone wall roundhouse, known as a broch.
Caithness has more brochs per square mile than any other part of Scotland, according to Highland Council.
Examples of the ancient buildings are also found on Orkney.
What lies beneath Nybster has intrigued the dig team, which is being led by AOC Archaeology and Caithness Archaeological Trust.
Mr Heald said he believed the site may have been occupied long before the Iron Age and provided habitation to various communities for 1,000 years.
He said: "We have dug down to what might be the earliest wall on the site and this wall may have been used to seal off the site as a territory, as if someone was saying 'this land is mine'.
"Typical of sites like these, it was reused and modified at different times."
Nybster is one of Scotland's most important mainland broch settlements Archaeologists are wary of any alterations that may have been made to the site during excavations led by Sir Francis Tress Barry in the early 19th Century.
A series of stone steps that may have been constructed on Sir Francis' instructions have been uncovered at the settlement.
From his Highland home at Keiss Castle, the British consul to Spain explored the ruins of nearby Caithness brochs.
According to an obituary written following his death in 1907, Sir Francis found the remains of elk, wolf, wild boar and a great auk, an extinct seabird.
Older artefacts found in the latest dig include the core, or centre, of a cannel coal bracelet.
The smooth circular stone was cut to create the hole in the bracelet.
It also suggests trade between the residents of Nybster and other parts of the Highlands because the nearest source of cannel coal is 50 miles (80km) away in Brora, in Sutherland.