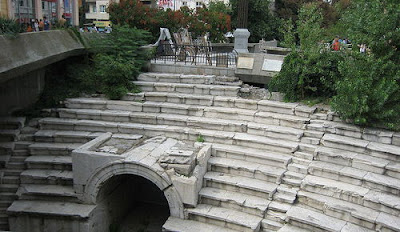 Plovdiv's Roman Stadium is due to undergo an overhaul worth some 700 000 leva, with restoration works due to be completed by December 15 2011, reports in Bulgarian media said on May 10.
The facility is among the largest Roman structures in the Balkans. The massive edifice is 180m long and had a capacity of over 30 000 spectators. It is believed that it was built during the reign of Septimus Severus (193-211).
The reconstruction process will be carried out by a consortium selected in open competition staged in March this year, Dnevnik daily reported.
The site is to be renovated, while concrete blocks and other modern construction will be removed so that the archaeological area can be revealed, the report said.
The Roman stadium is located in the Plovdiv city centre, but only part of the edifice can be observed from the Djoumayata Square, as most of it is still underground. Further excavation of the site is perceived to be difficult and costly.
The restoration project is funded by Plovdiv municipality, with the support of the financial mechanism of the European Community.
The stadium is one of the many Roman remains in the city, which include a very well preserved amphitheatre in addition to the the ruins of the Agora and a second theatre. There are also the remains of an aqueduct, temples and villas.