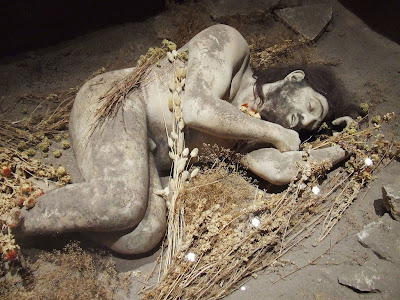 For decades the debate on the familial similarity of humans and Neanderthals has continue back and forth despite DNA evidence showing potential sub-species status. Their classification as human or otherwise determines whether they fall into the category of mortuary archaeology, the study of human funerary sites in the past. So far, it has been questionable whether or not Neanderthals showed the symbolic capacity necessary for the funerary behaviour displayed by humans. However, regardless of whether they are a sub-species or distinct species, new evidence is emerging which supports the idea that Neanderthals may have engaged in patterned mortuary behaviour.
Symbolic activity
While there is a larger question as to the symbolic capabilities and mental capacities of Neanderthals, the first question is what constitutes intentional burial and funerary behaviour. First, it is important to determine that the pit was intentionally dug for the purpose of putting the individual in the burial, which requires close attention to strata, the layers of soil. Second, intentional burials will be in locations that are clearly not due to animals dragging remains to a specific location. This means that intention is more probable when the individual is found in areas of high activity like the centre of a cave, such as the Kebara skeleton. Third, the remains are articulated. If remains are disarticulated it is possible that they were scavenged and not properly buried. (However, dis-articulation can also be a sign of revisiting a grave and memorialising the individual.) Fourth, inclusion of grave goods with the individual shows other individuals were involved in the disposal. However, artefacts are not necessarily grave goods: the individual may have died with the artefact or it may have been dropped at another time.
Palaeoanthropologists argue that the first known Neanderthal burial ground of Mediterranean Europe, dating to 50,000 years ago, is located at Sima de las Palomas in Murcia, Southeast Spain. Here, three individuals, an adult male, a young adult female and a juvenile, were found earlier this year buried underneath numerous rocks that were dropped on them from a height, their arms folded and hands placed closed to their heads. Two burnt panther paws found with them might have ritual significance or represent potential gifts, and although the rocks may have indicated the manner of death, palaeoanthropologists believe they were already deceased when buried.
Despite the significance of the Sima de las Palomas site, this is not the first proposed Neanderthal burial. At Shanidar Cave in Iraq there is the questionable flower burial dating to 60,000 years ago which, as the potential ‘first funeral’, has been the subject of debate since its initial discovery in the 1960s. Of nine Neanderthal skeletons found, one burial contained botanical remains of flowers including pollen, perhaps evidence of mortuary ritual. However, it is hard to ascertain whether the botanical remains were deliberately added, or whether the wind blew them into the pit that was used to prevent a dead body from polluting the site or attracting predators.
Another Neanderthal ‘burial’ was found at Kebara Cave in Israel in the early 1930’s again dating to 60,000 years ago. It included the torso of a Neanderthal and portions of a stone tool, potentially presenting an intentional burial with symbolic meaning due to the removal of portions of the skeleton.
Other possible Neanderthal burials include several caches over 100,000 years old, such as La Quina, France in the early 1900’s including fragmentary cranial remains of at least 22 individuals. L’Hortus, also in France and found in the 1960’s, included 20 individuals in a fissure, and Krapina Cave, Croatia, included 70 individuals discovered in 1899.
While burial may be intentional, the purpose behind it may have been to deter predators from the area of occupation or to deal with pollution. Moving beyond the argument of the ‘human-ness’ of the actions to look at the evidence from other perspectives we can see that there is no clear proof one way or the other. However, patterns may be more easily identified as further burials are discovered. And if all Neanderthals within a specific region are buried in the same position with the same artefacts, there may be a stronger argument for intention than just speculating on beliefs in the afterlife.