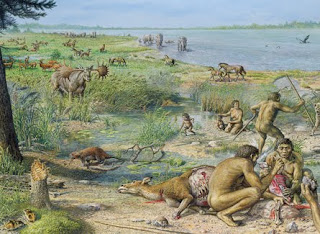 Excavations at a site in southeastern England indicate that hominids chilled out there a surprisingly long time ago.
Discoveries at Happisburgh, situated on an eroding stretch of coastline near the city of Norwich, show that members of an as-yet-unidentified Homo species settled on the fringes of northern Europe’s boreal forests at least 800,000 years ago and well before many scientists had assumed, say archaeologist Simon Parfitt of University College London and his colleagues.
Hominids repeatedly trekked to this northern locale, Parfitt’s team reports in the July 8 Nature. In excavations from 2005 to 2008, the researchers found 78 palm-sized stones with intentionally sharpened edges in several adjacent sediment layers.
We suspect these tools were made by the last dregs of a larger hominid population that had come when the area was warmer but hung on and survived under challenging conditions as the climate cooled,” says anthropologist and study coauthor Chris Stringer of the Natural History Museum in London.
Until a few years ago, researchers thought that hominids reached northern Europe no earlier than 500,000 years ago, remarks archaeologist Robin Dennell of the University of Sheffield in England. “Now it’s anyone’s guess when our earliest ancestors came this far north,” he says.
Fossil finds show that hominids migrating out of Africa reached western Asia by 1.8 million years ago (SN: 5/13/00, p. 308) and Spain’s Atapuerca Mountains by 1.2 million years ago (SN: 3/29/08, p. 196).
Recent stone-tool finds at another site in southeastern England, Pakefield, indicate that hominids lived there 700,000 years ago (SN: 1/14/06, p. 29). Because the climate warmed briefly at that time, researchers proposed that hominids spread northward when temperatures rose and retreated south when the going got cold.
The Happisburgh finds hammer that hypothesis, Parfitt’s team contends. An array of environmental clues — including remains of cold-adapted animals, insects and plants excavated along with the stone tools — indicate that hominids weathered chilly northern European winters.
Summer temperatures in Happisburgh were similar to or slightly warmer than those of today’s England, the scientists estimate, but winters were probably at least 3°C cooler: “… still miserable for those used to Mediterranean climes,” write geochronologists Andrew Roberts and Rainer Grün, both of the Australian National University in Canberra, in a comment published with the new report.
Happisburgh toolmakers lived just outside what is today a boreal zone, a densely forested, frigid swath of northern Europe and Asia. Forest plants and animals dwindled during ancient winters, the scientists say. Critically, though, geological analyses indicate that Happisburgh lay on an ancient course of the River Thames, near the North Sea and what was then a land bridge connecting southeastern England to continental Europe.
Ocean tides would have formed freshwater pools in the river and brought in marine life, such as the mollusks and barnacles whose shells have been unearthed at Happisburgh. Marshes on the river’s floodplain would have attracted animals such as mammoth, rhinos and horses. Bones of these creatures have also been recovered at the site, which has been worked by fossil hunters for more than a century.
Soil at the site contains evidence of a previously dated reversal of Earth’s magnetic field that provides a minimum age estimate of 780,000 years for the hominid finds. Excavated remains of extinct fossil plants and animals, combined with marine oxygen isotope data on ancient climate shifts, narrow the timing of hominid visits to relatively warm periods either around 840,000 or 950,000 years ago.
No hominid fossils have turned up at Happisburgh. Toolmakers at the ancient site may have been related to 800,000- to 1.2-million-year-old Atapuerca hominids in Spain, Stringer says. Discoverers of those fossils assigned them to a species called Homo antecessor, which they consider a precursor of European Neandertals and modern humans.
Homo erectus and small-bodied Homo floresiensis (SN: 5/8/10, p. 14) also existed at that time, but lived too far away in Asia and Indonesia to have reached Happisburgh, Stringer contends.
Although H. antecessor seems a good bet to have made the Happisburgh tools, the site has yet to yield evidence of controlled fire use, hunting or regular campsites, comments Dennell. “Were they tourists, migrants or colonists?” he asks. “We don’t know.”
Other potential hominid sites along an 83-kilometer (50-mile) stretch of coastline that includes Happisburgh may help to answer that question. “This area has the potential to be a British version of Olduvai Gorge,” Stringer says.
Work at Tanzania’s Olduvai Gorge since the 1930s has produced key hominid finds dating to as early as 1.8 million years ago.