Guatemala tomb may hold founder of a Maya dynasty (Guatemala) 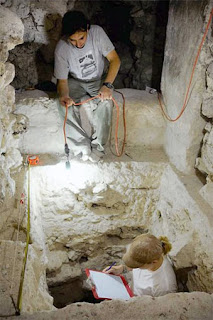 Guatemala tomb may hold founder of a Maya dynasty (Guatemala)

U.S. and Guatemalan archaeologists have found an unusually well-preserved burial chamber that they believe is the tomb of the founder of a Maya dynasty, a find that promises new information about the empire's formative period.
Archaeologist Stephen Houston of Brown University said the tomb was so tightly sealed that the team found remains of textiles, wood carvings and other organic objects that normally don't last in the humid tropics. Even after 1,600 years, the smell of decay was still present when the team broke through the walls of the tomb, Houston said.
Enclosed with the remains of what the team believes to be an early king were the bodies of six infants, who may have been sacrificed to be sent to the afterlife with the king. Blood-red bowls surrounding the tomb contained human fingers and teeth wrapped in decaying organic matter, perhaps leaves, that may have been symbolic meal offerings, Houston said. Sacramental breads are still wrapped in that manner today in the region, he said.
"If [Houston] is right and this is a dynastic founder … it would be one of the only times we've found one of these people," said archaeologist Simon Martin of the University of Pennsylvania, who was not involved in the research. It is also "uncommon to find sacrifices in the tomb.… That is one of the things that marks it out as pretty special."
The tomb was found at a site called El Zotz, about six miles from the city of Tikal in the Peten region of northern Guatemala. Tikal was one of the largest and most powerful urban centers in the Maya civilization and El Zotz apparently flourished on its border, even though a variety of evidence suggests that relations between the two cities were not good.
El Zotz was previously known as a small-time tourist destination because of a large population of bats; zotz is Mayan for "bat." Houston's team began mapping the site five years ago and excavating two years later. It had not been much explored by archaeologists, but was heavily looted.
"The pyramids looked like Swiss cheese," he said.
Occupation at the site began about 500 BC and was marked by "rapid-fire periods of intense building, pauses, then other periods," he said. "It had a highly episodic quality, what I would have predicted in a frontier zone, periodically buffeted by Tikal and getting caught in the political turbulences of the time."
The city originally lay in the valley due west of Tikal. But about AD 350, the population went into a dramatic decline and moved to more defensible positions on the escarpment on the sides of the valley. "I suspect they needed to skedaddle because of the increasingly fragile political position," Houston said.
The new tomb is in a pyramid called El Diablo in "a supremely defensive position" at the top of a steep slope that is difficult to climb. The pyramids of Tikal are visible in the distance. The tomb is at the base of the pyramid and others, most now looted, were built on top — a chronology that supports the idea that the occupant was the founder of a dynasty.
The tomb was large by Maya standards, about 9 feet deep and 4.5 feet high. It is sealed with alternating layers of mud and rock, which helped preserve the contents.
The primary occupant, originally installed on a green bier, was arrayed like a dancer, with bell-like ornaments made of shells and "clappers" made of canine teeth. It appears he was wearing an elaborate headdress with small glyphs on it, and his teeth were embedded with jewels.
"We have known from the '90s on that a big role of kings was to be a ritual dancer," Houston said. "This is the clearest instance I have seen of the king being put in a tomb in that role."
Dancing was probably associated with the maize god "and is linked to fecundity, growth of the Earth and sprouts of new seeds," Martin said. "It was a soulful, powerful thing" that emulated the swaying of maize.
Researchers are not sure whether the infants were specifically sacrificed to join the king, but they think that might be the case because of what Houston called "a gruesome-looking obsidian blade gunked up with some red substance" found nearby. They haven't yet tested to see if it is blood.
Other treasures in the tomb included shells imported from the Pacific coast, colorful bowls, remnants of textiles and ingots of a brilliant red pigment called specular hematite, similar to the bronze ingots in Mediterranean shipwrecks.
"This guy is taking his riches with him," Houston said. "They speak to the vast divide that separates the king from the people who supported him."