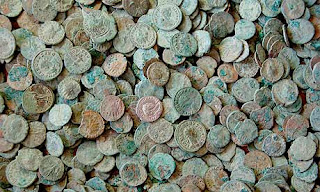 The largest single hoard of Roman coins ever found in Britain has been unearthed on a farm near Frome in Somerset.
A total of 52,500 bronze and silver coins dating from the 3rd century AD – including the largest ever found set of coins minted by the self proclaimed emperor Carausius, who lasted seven years before he was murdered by his finance minister – were found by Dave Crisp, a hobby metal detectorist from Devizes, Wiltshire.
Crisp first dug up a fingernail-sized bronze coin only 30cm below the surface. Even though he had never found a hoard before, when he had turned up a dozen coins he stopped digging and called in the experts, who uncovered a pot bellied pottery jar stuffed with the extraordinary collection, all dating from 253 to 293 AD – the year of Carausius's death.
Just giving them a preliminary wash, to prevent them from sticking together in a corroded mass as the soil dried out, took conservation staff at the British Museum a month, and compiling the first rough catalogue took a further three months.
How they got into the field remains a mystery, but archaeologists believe they must represent the life savings of an entire community – possibly a votive offering to the gods. A Roman road runs nearby, but no trace of a villa, settlement or cemetery has been found.
Roger Bland, a coins expert at the British Museum, said: "The whole hoard weighs 160 kilos, more than two overweight people, and it wouldn't have been at all easy to recover the coins from the ground. The only way would have been the way the archaeologists had to get them out, by smashing the pot that held them and scooping them out.
"No one individual could possibly have carried them to the field in the pot, it must have been buried first and then filled up."
Bland, who heads the Portable Antiquities service which encourages metal detectorists to report all finds, said the hoard had already absorbed more than 1,000 hours of work. He admitted his first stunned reaction when he saw the coins in the ground in April, was "oh my god, how the hell are we going to deal with this? Now I think it will see me out, the research will keep me going until my retirement."
"This find is going to make us rethink the nature of such hoards," he said. "The traditional thinking was that they represent wealth hidden in times of trouble and invasion – the Saxons were coming, the Irish were invading as always – but that doesn't match these dates."
The archaeologists praised Crisp for calling them in immediately, allowing the context of the find to be recorded meticulously. When a coroner's inquest is held later this month in Somerset, the coins are likely to be declared treasure, which must by law be reported. Somerset county museum hopes to acquire the hoard, which could be worth up to £1m, with the blessing of the British Museum.