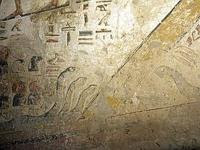 Excavations in Upper Egypt's Ehnasia archaeological area in Beni-Sueif recently uncovered the remains of a 3,000 year old temple dating from the reign of ancient Egyptian pharaoh Rameses II.
"Inside the remains of this temple, excavators uncovered ten cartouches of Ramesses II and beneath them a relief saying that the ruler had built this temple for himself in Ehnasia," said the head of Egypt's Supreme Archaeology's Pharaonic Section, Sabri Abdel Aziz in a statement on Thursday.
Ramesses II ruled Egypt from 1279-1213 BC and was the son of Seti I, whose secret 'tomb within a tomb' was uncovered in June by a team of Egyptian archaeologists in the Valley of the Kings in central Egypt.
A collection of mud-brick structures dating to the fourth and fifth century AD were also found at the site of the Ramesses II era temple, according to Aziz.
A collection of terracotta statues depicting Isis, Aphrodite and Horus were found inside along with pots and clay lamps, he said.
The team of archaeologists will continue excavation of the temple during the next archaeological season, Aziz said.
Ramesses II is regarded as one of Egypt's most powerful pharaohs and was nicknamed 'the Great Ancestor' by his successors.
The famous twin temples at Abu Simbel, carved out of the rocks, the Ramesseum at Thebes, and Pi-Ramesses, a city complete with zoo near the old city of Avaris, are among the monuments built during his reign.