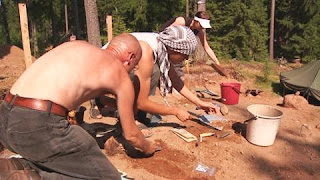 Archaeologists from the University of Helsinki are carrying out excavations of what they say is a unique Stone Age site at Järvenkylä in Virolahti in the far south-eastern part of the country.
The most striking feature of the site is the remains of an exceptionally large dwelling that the scientists describe as a "terraced house", in some ways like those found in many modern suburbs.
The original find was made three years ago while archaeologists were carrying out a field inventory of medieval period remains in the area .
The house now being excavated was built and occupied some 2000 -3000 years before the start of the present era. The foundations measure 45 x 20 metres.
"This is very exceptional in many respects. For a start it is awfully big. This dwelling has three rooms. The foundations of each of them are larger than a basic modern cottage," says dig director Teemu Mökkönen of the University of Helsinki.
In terms of design, the same type of dwellings have also been discovered in North Ostrobothnia and Russian Karelia.
"Then there are the material cultural remains associated here with this really massive house that are unique. There is no other site like this one," notes Mökkönen.
The material being found at the dig shows connections to other nearby areas, such as asbestos, a major technical innovation at the time from the inland Saimaa region of Finland, and the remains of ceramics from Estonia. Students taking part in the excavation have uncovered large amounts of these materials scattered around the house.