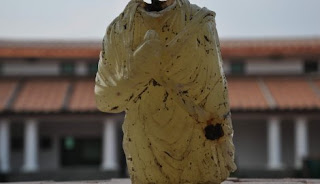 Director of Archaeological Park Viminacium, Miomir Korac, has said for Tanjug while major excavation was taking place at the Roman amphitheatre site at Viminacium, a sculpture made of jade and of excellent craftsmanship was discovered.
“Only a few days ago we had the discovery of jade figurine more than 35 centimetres long, but this one, just like that first one, is unfortunately not complete. What is fascinating, though, is that it’s made out of one piece and of jade and that the craftsmanship is excellent. This points to the fact the workshop must have been at this very place,” said Korac.
Korac pointed out the latest sculpture shows signs of meticulous work of a master, but that the figurine’s head has not been preserved, neither has its lower torso. The archaeological digging is still under way and Korac hopes further finds at the site will reveal the identity of the master.
Korac says that near the site where the jade figurine was discovered in the amphitheatre, a bronze, gilded eagle was found, obviously once perched upon a two-wheeled cart.
- “The Roman amphitheatre Viminacium is the only one in the central Balkan region and in the region of south-east Europe. Its size and degree preservation are astounding – the preserved walls are five metres high,” said Korac and added archaeologists had yet to come to the central point of the site – more than 18 metres underground.
The director of the Archaeological Park said acoustics at the Viminacium, which once could house 12,000 spectators, was typical of all Roman amphitheatres. Entire building blocks and even iron axis of a massive wooden door have been preserved.
- “We are definitely in for many more surprises here at the site, just like this jade figurine and the bronze eagle. I hope there are more discoveries before the summer’s end,” said Korac.