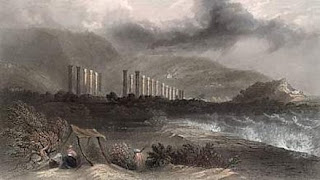 For a twelfth season in a row, archaeologists have begun this year’s excavations of the ancient city of Soloi Pompeiopolis, located in the present-day south-central Turkish province of Mersin, with view to making the area an open-air museum.
This season’s excavations, carried out with the cooperation of the Turkish Ministry of Culture and Tourism and Dokuz Eylul University, will focus on the Road with Pillars and the Soli Hill Town, the World Bulletin reported today.
The twelfth excavation at the site began on July 15 and it is aimed at making new discoveries in the ancient city, Dr. Remzi Yagci, a professor of Archaeology Department of the Dokuz Eylul University in Izmir and chairperson of the excavations at Soloi Pompeiopolis, told the publication.
A total of 25 experts will participate in the research of the site.
According to Dr. Yagci, a major earthquake happened where the Road with Pillars is and this year’s excavations aim to bring it out.
Archaeologists believe that there are important sculptures in the region. Those that we have been discovered so far are on display at the Mersin Museum, Dr. Yagci explained.
In addition, the archaeologists are working with the idea of turning the region into an open-air museum.
Soloi Pompeiopolis, or Soli, was an ancient city and port in Cilicia, in present day Turkey, a part of Mezitli municipality which in turn is a part of Greater Mersin. It was a colony of Rhodes, founded around 700 BC, destroyed and depopulated by Tigranes II of Armenia in the first century BC, and then rebuilt by the Roman general Pompey the Great, who settled defeated Cilician pirates there and renamed it Pompeiopolis. It is not to be confused with the ancient Paphlagonia’s Pompeiopolis, which is located in northern Turkey).