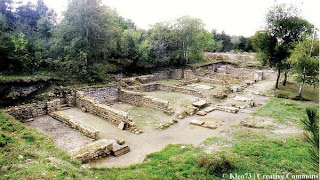 An archaeologist has discovered unique wall paintings in an ancient residence in the late Roman town of Novae, located in northern Bulgaria.
Over 21 days, Pavlina Vladkova, an archaeologist from the Regional History Museum in Veliko Tarnovo, researched a residence, located outside of the territory of the erstwhile legionary base, which was located in Novae. She studies rooms that date to the second, third and fourth centuries.
One of the premises she studied was a dining room with a length of 12 metres and width of 4.5 metres and heating built into the floor and walls. The room was divided into two parts, and Vladkova stumbled onto the valuable frescos in one of them.
One of the room’s walls was covered in coloured paint, while the other had paintings on it. The decoration is reminiscent of contemporary wall paper, the archaeologist explained and added that the colouring has been well preserved.
The residence where the frescos were found used to house representatives of the imperial family, Vladkova said. Work on preserving the wall paintings has already started.
Meanwhile, a team of Polish archaeologists continues excavations at the Novae site this summer, with plans to study the military hospital at the site. At the same time, a group of archaeologists from the National Archaeology Institute at the Bulgarian Academy of Sciences will be studying the officers’ residences in Novae.
The site of Novae is situated on the southern bank of the Danube near the present-day town of Svishtov. The site was an ancient Roman legionary base. During the reign of Emperor Trajan, the legio I Italica settled in the base, from where it was supposed to guard the borders of the Roman Empire from the barbarians. A settlement was established and grew around the base.