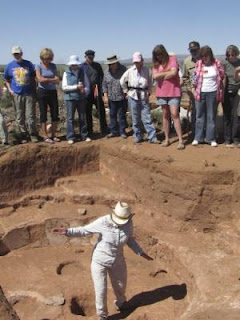 Archaeologists work on ancient ruins as dam construction begins
Kanab » A site once occupied by prehistoric Puebloan people, which includes multiple American Indian remains, is being excavated before the place is scraped away to make room for a dam and reservoir.
The ruins will eventually be flooded by the Jackson Flat Reservoir, being built by the Kane County Water Conservancy District to hold water normally lost in the summer months. It will be piped from Kanab Creek and used by farmers and possibly leased by the city and Kane County.
Initial work on the dam site has begun and archaeological work is expected to be finished by the end of the month.
The reservoir will engulf 15 archaeological sites ranging from Paleo-Indian culture to pioneer settlements. A dozen of the sites, according to the draft environmental assessment, potentially could qualify for the National Register of Historic Places.
The American Indian remains will be moved and reburied. In a December 2006 letter, the Kaibab Band of Paiutes warned that the tribe would not endorse the project because it prefers to "preserve what is left of our cultural heritage by protecting archaeological sites."
But Tim Rogers, chairman of the Kaibab Band of Paiutes, said Saturday that the tribe has had good communication with officials involved in the dam since then. He expects the remains to be reburied as soon as possible near their original resting place in a protected area.
Rogers said he knows of at least 20 sets of remains that have been located so far. "What we don't want is for them to be taken away for study," he said. "We want them to remain here."
He said the discovered remains were not buried in traditional Paiute positions and there was no evidence of burial ceremonies. "Very few artifacts have been found [with the remains]," he said.
Archaeologists have been respectful of the remains as they have been uncovered, Rogers said.
Kenneth Wintch, an archaeologist with the state's School and Institutional Trust Lands Administration, who is working on the project, said archaeological work began at the site four years ago.
Even though the project is being built on mostly private land, the archaeological work is required as part of the environmental assessment under the National Historic Preservation Act because federal funding covers part of the dam's $12 million price tag.
Heidi Roberts, an archaeologist and president of HRA Inc., hired to survey and document the site, said the pit houses being uncovered are from two periods of Puebloan basket-weaving cultures who populated the area of southern Utah from A.D. 200 until 1050.
She said inhabitants were part of a culture known as the Virgin River branch of Pueblo who occupied much of southern Utah and the area stretching to present-day Las Vegas.
The site was populated at varying times in that period by people who, at one point, built an oversized house 30 feet in diameter, inside of which a smaller house was later built. Roberts said her team and archaeologists with another private company and with Brigham Young University have unearthed about 20 houses and storage pits for crops.
"We developed a research design on where to dig that will focus on the important questions we have, like how the houses were organized, if they were built around a courtyard or built in a line," she said.
About 70 people went along on one of two tours May 20 to the dam site, organized as part of the Amazing Earthfest in Kanab, celebrating the science and wonders of the Colorado Plateau.
Roberts said dating of the oldest pit houses is based partly on the fact that only spear points were found. There was no evidence of bows or arrows, which were prevalent in the area by about A.D. 400.
The oldest pit houses did not contain pottery fragments, which were found in houses of later periods, another clue to the structure's approximate age. None of the pottery shards were in the corrugated design produced after A.D. 1050.
Middens, the term used to describe where things were dumped once they had lost value, are also being excavated and contain evidence of crops, including corn, beans and squash, that were cultivated by the inhabitants.
Also uncovered were round pits used for storage of harvested crops. Pollen found at the site, along with charcoal from hearths, will be carbon-dated to establish more definite dates.
Roberts said walls of pits were lined with slabs of stone from an unknown area. Later structures were covered with earthen plaster. Round wooden poles commonly were braced against the walls to support the structure if it had a roof covered with brush and earth. But none of the poles or other organic building materials remain.