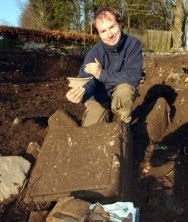 West Cumbria floods uncover Roman finds prompting major probe
By Thom Kennedy
Roman finds uncovered by the floods of last November have excited archaeologists – and are set for a major investigation.
The remains of a Roman fort at Papcastle have been open for several years, but nobody has ever known the shape of local roads, the size of the civilian settlement attached to it, where the river Derwent ran and where it was crossed, or where the site’s cemetery was located.
However, the floods which devastated Cockermouth last year also washed up several fragments of pottery, carved stone and possible architectural remains on the opposite side of the Derwent from Papcastle, giving new hope that some of the area’s ancient mysteries could soon be uncovered.
Now, archaeologists from Grampus Heritage and Training are to launch a survey of the land around where the finds appeared, and hope to find the remains of buildings, roads, and signs of occupation.
Using magnetometers – instruments that can detect buried walls – exploration will centre on fields alongside the River Derwent.
Project leader Mark Graham said the finds were exciting and could illustrate the size and shape of the domestic area around the fort.
He said: “A considerable amount of pottery has been found post floods. We’ve always suspected the Romans had some sort of river crossing at Papcastle. Hopefully, our searches might provide some answers.
“The field we are starting in is on the opposite side of the field from Papcastle – that may be evidence of a river crossing, or it may be that the course of river has moved and the site where we are looking was on the same side. We don’t really know the road layout around there, we don’t know where the cemetery was.”
Channel Four’s Time Team had looked at an area around Papcastle, but never as far from the fort remains as the new finds.
And there has never been a systematic geophysical investigation, but the new project will see magnetometers – instruments that can detect buried walls – used to survey a large area near where the finds were made.
Mr Graham added: “We will see if we can see into the soil. The logical next step would then be targeted excavation, with landowner permission, of particular features. We can’t guarantee the survey will produce anything, but by the end of June we should have an idea of how successful it has been.”
Volunteers are being sought to help with the investigation, details from which will form part of the county’s archaeological record.
Fieldwork takes place from May 24 to 28.
For details contact Grampus Heritage and Training on 016973 21516, or e-mail enquiries@grampusheritage.co.uk