Roman Ships and Amphorae Found off Sardinia and Panarea 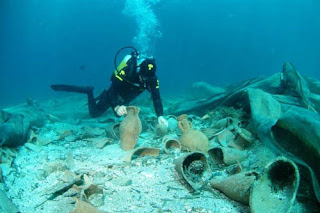 Roman Ships and Amphorae Found off Sardinia and Panarea

Roman ship-discovery season is in full flow, with several finds and explorations announced in the past week.
Yesterday Ansa ran a story about the discovery of a 25-metre merchant ship from the first century AD with its cargo of 500 amphorae containing fruit and vegetables still on board. The ship is said to be in perfect condition and was found south of Panarea, in the group of Aeolian/Lipari islands north of Sicily. The news agency reported that Italy's Maritime Superintendency and the Aurora Trust, an American foundation, were responsible for the find.
Aurora Trust found five wrecks off the Italian island of Ventotene last year, and in fact finding Roman shipwrecks in the Mediterranean is not a rare occurrence. Several discoveries from 2009, at Ventotene and Cyprus, were reported on Heritage Key, while another company searching off the coast of Campania (Capo Palinuro) earlier this year also found a Roman ship carrying amphorae.
Last week two discoveries were announced off the coast of Sardinia. A Roman merchant ship, dating from around 100 BC, was found off the coast of La Maddalena, an island off the north-eastern coast of Sardinia, while another wreck site has been detected off the north-western coast, near Costa Paradiso.
According to a local newspaper, La Nuova Sardegna, the ships are from between the second century BC and the first century AD.
However, the 'normality' of coming across a 2,000-year-old ship in the Med is reiterated by Dr Rubens D'Oriano, an expert in under water archaeology at the Superintendency for Archaeological Heritage for the provinces of Sassari and Nuoro, in Sardinia.
Speaking earlier this week about the discovery of the ancient shipwreck near La Maddalena, he said: “Traces of a Roman sailing vessel have been found, which is to say that there are traces on the surface of the sea bed, showing that part of a Roman ship is buried under the sand.”
Dr D'Oriano added: “Fragments of amphorae and bronze nails have been found on the surface and it is archaeologically interesting. However, it's a very well documented type of archaeological discovery.” He emphasises that the discovery off La Maddalena is nothing out of the ordinary and describes it as “completely normal”.
When asked if the site may be investigated further or excavated, he is highly sceptical, noting that there is absolutely no funding at all from the Italian state for this type of archaeological site in Sardinia.
The sites were first noticed by amateur divers and were then investigated by archaeologists accompanied by a team of underwater experts from the Carabinieri's cultural heritage guards in the province of Sassari.
The site off Costa Paradiso is near the town of Trinità d'Agultu e Vignola. Large Roman ceramic vases, known as dolia, from the first century AD have been found at a depth of 50 metres.