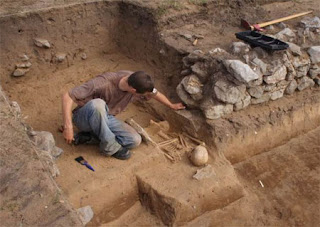 ARCHAEOLOGICAL finds from across Wales can now be explored at the touch of a button, thanks to a new online database being launched tomorrow.
The website, Archwilio – which means “to explore” – catalogues the historic environment records of Wales, allowing users to freely explore details of thousands of different archaeological sites dating back more than 100,000 years.
Created using information from the four archaeological trusts of Wales, the new service is being launched by Welsh heritage minister Alun Ffred Jones.
Emily La Trobe-Bateman, of Gwynedd Archaeological Trust, said the website is an exciting step forward in recording data.
“Archwilio is the online access system to the Historic Environment Records (HER) of Wales,” she said. “The idea is to disseminate information leading to a wider understanding of our cultural heritage and historic environment.”
Currently around 100,000 individual entries are held by the four regions, which are continually updated and expanded as new information becomes available.
“As well as big well-known sites like castles, churches and hillforts, you’ve also got little records of deserted long houses and small deserted medieval settlements, which could be just a ruined cottage site in the uplands,” said Marion Page, HER manager with Dyfed Archaeological Trust.
As well as being able to view artefacts such as an Iron Age bronze plaque found at the Moel Hiraddug hillfort on the Clwydian hills in North Wales, web users can find details of any excavation work or archaeological discoveries local to them.
Among the sites are a Roman discovery beneath a school car park in Neath. The Glamorgan- Gwent Archaeological Trust is working with Wales and West Utilities, Dwr-y-felin Comprehensive School and Cadw to investigate the remains of a Roman fort called Nidum.
“These are the kinds of projects that can be discovered and shared by using the site,” said Mrs Page.
“It is a very exciting prospect to be able to share such a wealth of information on a database that will hopefully just grow and grow.”