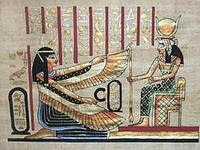 A team of archaeologists has discovered two colourful tombs, believed to be around 4,300 years old, at the ancient necropolis of Saqqara, south of Cairo, Egyptian culture minister Farouq Hosni said on Wednesday.
Both tombs, found west of the Step Pyramid of Djoser in the Giza area, are carved into rocks and and date from the 6th Dynasty (2,374-2,191 BC), the head of Egypt's Supreme Council of Antiquities Zahi Hawass said.
The tombs belong to Shendwa, a top government official and head of the royal scribes, and his son, Khonsu, who inherited the same titles as his father, according to Hawass.
Shendwa's tomb has a beautiful false door depicting him sitting in front of a table of sacrifices, signifying that he held important positions during that period, Hawass said.
The tomb's burial shaft is located directly beneath the false door, and Shendwa's wooden coffin was buried in a 20 meter-deep well that had prevented thieves getting in.
Shendwas’s wooden sarcophagus had disintegrated due to humidity and erosion. Beside the sarcophagus, excavators found limestone jars including five offering vessels carved in the shape of a duck.
Upon opening the vessels, the bones of the ducks were still intact, Hawass said.
Excavators also found a painted relief and a 30 cm tall obelisk made of limestone inside the burial shaft.
“This obelisk symbolises the worship of the sun god Re,” said Hawass.
Hidden below another false door, archaeologists also found the tomb of Khonsu, who inherited his father's titles. The tomb also contained a sacrifice table and stone lintel engraved with 6th Dynasty symbols.
Above the false door to Khonsu's tomb was a brightly coloured relief of the deceased in different poses, Hawass said.
The Egyptian team has been excavating at the site since 1986.