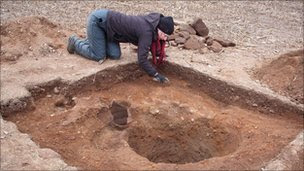 Archaeologists excavated the ground around the Carlinwell Stone at Airlie, near Kirriemuir, after it fell over earlier in the winter.
Both pots - known as collared urns - could be up to 4,000 years old and were typically used in early Bronze age cremation burials.
The 7ft (2.1m) high monolith will be re-erected on Friday.
One of the pots is about 4in (10cm) in diameter, and the other is about 8in, the archaeologists said.
Melanie Johnson, from CFA Archaeology of Musselburgh, said: "The pots are typical of early Bronze Age cremation burials.
"People were burned on pyres and their remains gathered, put into pots and buried upside down in a pit."
Rubbing stones
Ms Johnson said there was "plenty of bone" inside the pots, which would be enough to determine the gender and age of the person, and if they had illnesses or trauma wounds.
"They will be taken to a lab in Edinburgh, and radio-carbon dated," she added.
John Sheriff, an investigator with the Royal Commission on the Ancient and Historic Monuments of Scotland, said it was impossible to date the stone precisely but it is very likely to be neolithic or Bonze Age, and could "easily" be 4,000 years old.
He said: "This goes some way to proving that Carlinwell Stone is a genuine prehistoric standing stone, rather than something put up later.
"There was a fashion for putting up rubbing stones for cows during the 19th Century to stop them ruining the dykes by pushing against them, and they looked like standing stones, but we can say for sure this is prehistoric because of its great height.
"Human bones were found at the base of the stone in the early 18th Century, and my hunch is they were also Bronze Age, although it's possible there is no connection."
Soil samples from around the stone's socket will be analysed and any organic material found radio-carbon dated if possible.
That would go some way to solving the mystery of whether the stone was erected to mark the graves, or whether the pots were put in place afterwards.