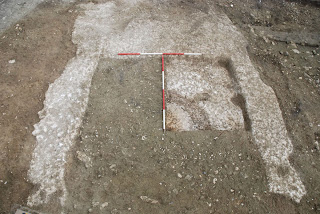 English Heritage archaeologists have uncovered a ceremonial building, thought to be 4,500 years old during a recent 6-week archaeological excavation at one of Britain’s most important but least understood prehistoric monuments, Marden Henge in Wiltshire, south west England.

Excavated Neolithic ceremonial structure at Marden Henge. Photo: English Heritage
The structure has been discovered on the site of a previously unknown smaller henge within the banks of the much larger Marden Henge and is one of the best preserved Neolithic buildings in Britain outside the Orkneys.

Balanced precariously on top of a bank, and with an opening straight out onto the slope of the internal ditch, it seems an unlikely choice for a dwelling. However, it would have been in a prime location overlooking the interior of the henge, to observe activities in the centre of it, or across to the River Avon below.

Mr Leary further remarked, “Just outside and on either side of the building were areas containing artefacts such as bone needles, pins, awls, and flint tools. The eastern spread was charcoal rich, representing possible rake-out from the hearth, and the western portion contained a large number of pig bones, which may be evidence of feasting.”
The lack of substantial postholes around the surface prompts the archaeology team to think that this may have been a temporary structure, used for a single event.
Mr Leary believes that the likelihood of finding more Neolithic buildings on the site are high and thinks there may be a series of temporary structures sitting on top of the henge bank, each with an associated midden. He added that there could also be earlier buildings preserved within the layers of the bank.
Henge monuments are enigmatic features of late Neolithic Britain (between 2400 BC and 2000 BC). They are enclosures formed of banks and ditches and most experts now believe that significant ceremonial or ritual activity occurred within them. Few, such as Stonehenge and Avebury in Wiltshire and Castlerigg in Cumbria, have impressive upright stone settings still standing.


Unlike Stonehenge and Avebury, Marden Henge no longer has any surviving stone settings, although it may once have had, but its sheer size is astounding. Comprising a substantial and well-preserved bank with an internal ditch that defines and encloses an area of some 10.5 hectares (approximately equivalent to 10 football pitches), it is one the largest Neolithic henges in Britain but has now been almost completely destroyed due to ploughing and erosion.

All that has remained is the evidence of a huge mound similar to a smaller version of Silbury Hill at the centre of the henge, which collapsed in 1806 and was completely levelled by 1817. English Heritage hopes to find out more about this feature by obtaining dating material from any surviving features within its centre.