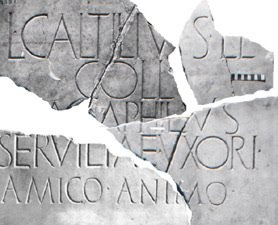 A married couple from Pompeii have been reunited with the recovery of a missing piece of a 2000-year-old marble puzzle made of several inscribed fragments.
Broken apart and buried during the eruption of Mount Vesuvius in 79 A.D., the pieces belonged to a tomb inscription.
They were unearthed in 1813 along the Via dei Sepolcri in Pompeii near a burial tomb known as "Tomb of the Marble Door."
Still under construction at the time of the eruption, the tomb featured a door made of a single piece of marble, but carved to resemble the sort of folding wooden doors typical in Pompeian houses.
Although unfinished, the tomb had already been used for a number of burials.
"Most likely, the inscription had been displayed in some temporary fashion to be later embedded in the face of the tomb once the structure was completed," Peter Kruschwitz and Virginia Campbell at the University of Reading wrote in the journal Tyche.
But it never made it there. Smashed to pieces by the eruption, the inscription, or what remained of it, was stored in the huge deposits of the National Archaeological Museum of Naples.
Later reassembled by piecing together six fragments, it read: "L(ucius) Caltilius L(uci) l(ibertus) Coll(ina tribu) [P]amphilus [...]ae uxori [...]mo."
While four pieces referred to "Lucius Caltilius Pamphilus, freedman of Lucius, member of the Collinian tribe," two fragments contained the Latin word "uxori," indicating a wife.
Kruschwitz and Campbell identified the missing spouse by scrutinizing photographs of various fragments of inscriptions stored at the Naples museum.
"According to the original excavation report, the fragmentary inscription consisted of seven pieces of marble. The missing piece was in the same museum, but until now, has not been recognized as part of the same inscription," Campbell told Discovery News.
Containing nothing but the name of a female -- Servilia -- and the first part of a phrase, the fragment reads: "Seruiliae [...] amico anim [o ...]."
Although there are some other small pieces missing, the inscription is now legible and reads: "Lucius Catilius Pamphilus, freedman of Lucius, member of the Collinian tribe, for his wife Servilia, in a loving spirit."
After spending nearly 2,000 years apart, Lucius Catilius Pamphilus and Servilia were finally reunited.
"What makes the story so beautiful is the way the inscription was fragmented, with the name of the wife separated of that of the man, and the 'in a loving spirit' bit left with the wife's fragment," Kruschwitz told Discovery News.
Clearly an outsider to the Pompeian establishment, Caltilius Pamphilus was a former slave who took great pride in his status.
"You can see this by the way he displays his tribal affiliation in the inscription," Kruschwitz said.
The Caltilii family became fairly powerful at a slightly later phase of Pompeii, under the rule of Nero. It has been alleged that a man, Quintus Coelius Caltilius Iustus, a duovir of 52/53 A.D. (someone who embarked on a political career and became member of the governing body of the city) was indeed an offspring of this couple.
Giuseppe Camodeca, professor of Roman history and Latin epigraphy at the University of Naples "L'Orientale," agrees that the piece with the Servilia's name is the right one.
"I'm totally convinced about the juxtaposition," said Camodeca, who several years ago physically reassembled the first six fragments at the museum in Naples.