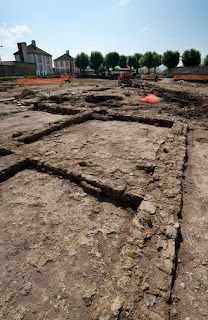 Part of a two thousand year old settlement has recently been discovered within the suburbs of the French town of Autun. Founded at the beginning of the 1st century AD, Autun was built by order of the first Roman Emperor, Augustus, (27 BC-14 AD) and was named after him – Augustodunum.
The town of Autun was a gift from Rome and replaced the old Gallic capital of the Aedui tribe, the oppidum of Bibracte located on Mont Beuvray. Autun went on to become one of the largest towns in northern Gaul, due to its craft industry, cultural influence and position as capital city. Recent excavations by archaeologists from INRAP, have revealed much about the development of this section of the city, that was both a craft quarter and a residential area.
Between the 1st and 3rd centuries AD, a great number of small figurines were produced and distributed across Gaul, and beyond. Cast, using very fine clay, Roman Gaul had several workshops which mass-produced these popular images, aimed at a clientèle too poor to purchase bronze figurines.
In 1920, Camille Jullian, a noted French historian, described the products of the various figurine makers in his History of Gaul – “Allusa at Bordeaux, known for his Mothers – the Armorican Rextugénos, for his formal Venuses – Sacrillos the Arvernian, from Toulon-sur-Allier, the leading supplier of doves – and above all Pistillus the Aedui, who was a master of the family genre, filling the whole of Gaul with nursing mothers, children in cots, domestic beds, and guard dogs.”
Pistillus was thought to have been commercially active towards the end of the 2nd century and beginning of the 3rd century AD. His production was widely distributed across the whole of Gaul, towards the Atlantic, – via Bourges, Poitiers, Nantes, etc., – towards the east and the north-west along the Via Agrippa. His wares also reached upper Germany, the provinces of Raetia and Noricum – Mayence, Bavaria, Lake Constance, and the Austrian Tyrol.
Finds from the site
The discovery of a potter’s kiln, moulds, figurines and wasters (firing failures) signed “Pistillus” confirm the presence of his Autun workshop. His work stands out from that of the other coroplaths (figurine makers) because of his meticulous attention to detail and different themes: protective goddesses such as Venus and Abundance, and assorted animals, but also tender representations of Roman intimacy such as The Bordeaux lovers, discovered in 1850.
“One should not mistake the merit of Pistullus and his emulators: their figurines are poor works, made for poor households
”At present, the excavation has produced figurines of Venus, of nursing goddesses, not to mention more erotic works.
However, Camille Julian cautions in his book, “One should not mistake the merit of Pistullus and his emulators: their figurines are poor works, made for poor households, which would fill the shops for a few centimes or would be spread out by hawkers at market time.”