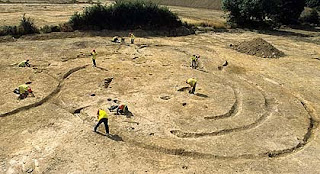 Archaeological study unearths Roman Villas and clues to Iron Age Yorkshire
The combined results of a five-year aerial archaeological study which uncovered Iron Age and Roman forts in West Yorkshire have been revealed today in a new book.
Aerial photo mapping undertaken as part of English Heritage's National Mapping Programme was combined with older aerial photographs, the results of field walking and geophysics together with data from archaeological digs to produce the study, which covers the 65-kilometre Magnesian Limestone Ridge, running from Wetherby in the north to Dinnington in the south.
Most of the cropmarks belonged to the Iron Age (600BC to 50AD) and Roman period (43AD to 410AD). The potential site of a Roman villa near Aberford in West Yorkshire has also been revealed for the first time, along with a possible new Roman fort on the south bank of the River Don at Long Sandall, near Doncaster, adding weight to a long held belief that such a fort once existed locally.
Evidence of what are supposedly pre-Roman defensive works are also found on the north side of the River Don.
Hundreds of prehistoric trackways were also revealed along with scores of enclosures, some likely to have been used to corral cattle.
"This study combines all the available evidence for the historic landscape of this area of Yorkshire which covers 1,500 square kilometres," explained Ian Roberts, Principal Archaeologist with West Yorkshire Archaeology Services and one of the authors of the new report.
"The only documentary source for how people lived 2,000 years ago are Roman writers, so we need to be able to read the landscape to make sense of how our ancestors lived.
"In many areas settlement was surprisingly intensive, while others are bereft of evidence. Alarmingly, we also noted that some cropmarks clearly visible in photographs from the 1970s and 1980s have vanished in more recent images because they have been ploughed out. That adds urgency to the need to record and understand clues in the landscape before they are lost for good."
Cropmark Landscapes of the Magnesian Limestone of South and West Yorkshire by Ian Roberts with Alison Deegan and David Berg is available from Archaeological Services WYAS, PO Box 30 Nepshaw Lane South, Morley, Leeds, LS27 0UG. £15 (£3.50 post and packaging).