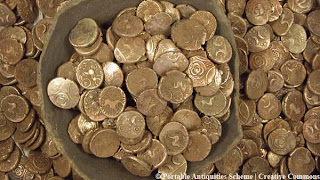 The landfill with coins recently discovered at the Skopje Fortress is the biggest repository of Byzantine gold and silver coins ever discovered on the territory of Macedonia, archaeologists told national media today.
In the chest, archaeologists found 44 gold coins and 76 Venetian coins, dating to the thirteenth century, or the Byzantine Era.
This is the most significant archaeological find at the Skopje Fortress, along with the Medieval lead stamps that were discovered several years ago at the site, Pasko Kuzman, archaeologist and Director of Cultural Heritage Protection in the Macedonian Ministry of Culture, told the Vreme newspaper.
Golden Byzantine coins have been unearthed at other sites in Macedonia, but rarely and in smaller quantities, he added. According to archaeologists, large quantities of bronze coins are often found at ancient sites around Macedonia.
The newly discovered gold coins are stamped with images of Byzantine kings and Biblical motifs, while the Venetian silver coins are stamped with the images of Venetian leaders.
The valuable pieces, according to Kuzman, were imported from lands with which the Byzantine rulers cooperated. The commercial ties are also well-known of the medieval rulers with the Venetian Republic, which is famous for its splendour and prosperity.
It is interesting that hundreds of coins were found in a small box, meaning that they were carefully kept and had great value for people of that time, Kuzman noted.
Currently, the gold and silver coins from the Skopje Fortress are being preserved in a laboratory and will soon be examined in detail by numismatic specialists.
The Skopje Fortress will be one of the archaeological sites that will be examined in Macedonia this year. Archaeologists are excavating the site’s central area and the plan is to restore and conserve the so-called Cyclopes Walls.