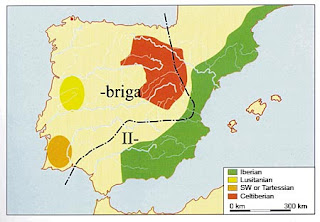 These works have recovered more than twenty burials, mostly groups, which are dated the first century BC and show clear Iberian cremation rites.
Iberian necropolis dated 100 BC in Arjona (Jaén) Heavy rain in Arjona uncovers the further remains

The accidental finding in Arjona (Jaén) was discovered in the remains of an Iberian necropolis of the first century BC, some of the archaeological work is to be presented in June at an international meeting.
The box, cube-shaped and made of sandstone, has, on its four sides, relief’s of different scenes of mourning, with fights between two warriors, both on horseback or on foot. The stone box has a cover and inside were the ashes of two people, according to a coroner at the Complutense University of Madrid who have analyzed the remains belonging to a man and a woman, burned less than 800 degrees, as evidenced some pieces of bones from the hand and foot. The discovery was made incidentally during the rains last year near Arjona.

As the winter rains threatened to damage the site, Arturo Ruiz and Manuel Molinos, director and deputy director of the Andalusian Center of Iberian Archaeology (IAAC), respectively, promoted an emergency archaeological intervention, conducted between February and May.