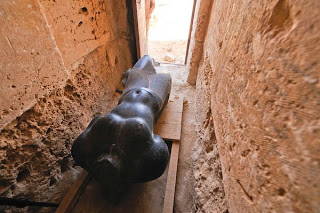 A massive, headless statue of a Greek king has been found in the ruins of an ancient Egyptian temple, adding to evidence that the structure could be the final resting place of Marc Antony and Cleopatra, excavation leaders say.
For the past five years archaeologists have been searching around the temple of Taposiris Magna, about 28 miles (45 kilometers) west of the port city of Alexandria (map), in hopes of finding the couple's graves.
(See pictures related to the new National Geographic exhibit "Cleopatra: The Search for the Last Queen of Egypt.")
The newfound black granite statue—which stands about 6 feet (1.8 meters) without its head—is thought to be of King Ptolemy IV, because a cartouche carved of the same stone and bearing his name was found near the figure's base. (See a picture of headless king statues at Luxor Temple.)
Ptolemy IV was one of several Greek royals who ruled Egypt during the Ptolemaic period, from 332 to 30 B.C. (Take an ancient Egypt quiz.)
In ddition to the headless statue, the Egyptian-Dominican dig team found an inscription, written in Greek and hieroglyphics, in the foundation deposits of one of the temple's corners. The writing says Ptolemy IV—who ruled from 221 to 205 B.C.—commissioned the temple.
Previously experts had thought that the temple was built during the reign of Ptolemy II, who ruled from 282 to 246 B.C.
"If you are arguing for it to be a burial place for Cleopatra, then the later it is built, the more chance we have to have connections with her—the greater the possibility it was still active during her lifetime," said Salima Ikram of the Egyptian Museum in Cairo, who is not associated with the Taposiris digs.
During the latest digs, the archaeological team also found a row of 6.5-foot-tall (about 2-meter-tall) bases for sphinxes outside the temple's north entrance, where the granite statue was found.
Martinez and colleagues think the bases mean the north entry—and not its east portal, as had been previously suggested—was the building's main gate, since other Egyptian temples feature sphinxes leading up to their entrances.
Taposiris Once a Bustling Temple
Cleopatra VII was the last queen of the Ptolemaic dynasty, ruling as co-regent with her son, Ptolemy XV. The queen and her lover, Roman general Marc Antony, committed suicide after their defeat in 30 B.C. by Octavian, who soon after became Rome's first emperor, Caesar Augustus.
The newfound statue—along with two statues of the Egyptian goddess Isis and the ruins of the temple's main gate—are the latest pieces of evidence that link Taposiris Magna to the Ptolemaic rulers, and perhaps to the ill-fated lovers.
Archaeologists have known of Taposiris Magna for centuries, with the first excavations started at the temple under Napoleon Bonaparte in 1801.
Until recently, many experts thought Taposiris was an unfinished temple, because it has no inscriptions and bore little evidence of internal structures. Archaeologists knew of a massive cemetery outside the temple and a tower that may have been a lighthouse, but little more.
But the recent digs have made the temple look much more active, increasing the likelihood that it was an important site in Cleopatra's day.
So far, the temple's cemetery has been found to contain at least 12 mummies, 500 skeletons, and 20 tombs. The bodies were buried facing the temple, which could mean the building contains the tomb of an important figure, Martinez said.
Inside the temple, the team found a place for a sacred pool, rooms likely used for mummification, and chapels dedicated to the gods Osiris and Isis. The powerful pair were husband and wife in Egyptian mythology—a fact that could have inspired the couple to chose the temple as their burial site.
"Cleopatra could [represent] Isis and Marc Antony could be Osiris," said Zahi Hawass, secretary general of the Egyptian Supreme Council of Antiquities (SCA), who is supervising the digs.
And in 2008 the team unearthed an alabaster bust of Cleopatra, coins bearing her image, and a bronze statue of the Greek goddess Aphrodite, among other artifacts. (See pictures of Cleopatra's bust and other treasures from Taposiris Magna.)
"After excavations, we have uncovered what belongs to this temple, to this huge complex, proving it really was one of the most sacred temples in Alexandria" during the Ptolemaic period, said archaeologist and dig leader Kathleen Martinez.
"And because of the solemnity of this temple, and it was so sacred at that time, I believe it could have Cleopatra's tomb."
"Perfect Place" to Hide the Dead
Hawass added that Taposiris Magna is a good candidate site for the tombs of Antony and Cleopatra because the legendary couple would have wanted to be sure Roman conquerors couldn't find and desecrate their graves.
Marc Antony likely suspected that Octavian would have paraded the dead bodies around Rome to show off his military might. The couple would have therefore wanted to be buried in a sacred but secret location outside Alexandria's royal quarter. (Related: "Underwater Museum Planned for Egypt's Alexandria.")
About a year ago the SCA allowed Martinez to start using ground-penetrating radar inside Taposiris Magna. The results show a series of tunnels and as many as eight underground chambers that are still being explored.
"It's the perfect place to hide their tombs," said Hawass, who is also a National Geographic explorer-in-residence. (The National Geographic Society owns National Geographic News.)
Excavation leader Martinez added that the sheer size of Taposiris Magna would have made any tombs there hard to find.
"This temple complex is five square kilometers," or roughly two square miles, Martinez said. "We have been searching with new technology—how would the Romans have found them?"