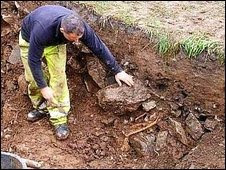 Tests carried out on a skeleton discovered at an archaeological dig in Derbyshire have found it was that of a pregnant woman.

Experts said they were surprised by the female find because the site, near Monsal Dale in the Peak District, had been believed to be a military scene.

Now, extra lottery funding means there can be a second dig at the Fin Cop hill fort site to find out more.

During the excavation, the woman was uncovered among the jumbled stone of a collapsed rampart.
The main focus of the dig was to find how the ramparts of the hill fort were built and when they were erected and archaeologists described the skeleton find as "unexpected".

Experts said it was evident the woman had been thrown into the ditch as the stone wall of the hill fort was being pushed in.

Specialist analysis of the bones revealed the woman to have been about 21 to 30 years of age when she died between 300 and 200 BC.

The Longstone Local History Group has now been awarded a grant of nearly £50,000 to continue to research the area with the help of Archaeological Research Services Ltd.

One of the project managers, Jim Brightman, said: "Quite a lot of very important finds cannot look like much on site.

"But when you get back to the lab, throw the scientific techniques and analysis at them, that's when you start to get the story out.

"The bones are a great example of that, we found out so much more by analysing them."