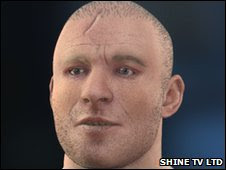 A reconstruction has revealed the face of a medieval knight whose skeleton was discovered at Stirling Castle.
Experts are now attempting to discover the identity of the warrior, who is likely to have been killed in the 13th or 14th Century.
The skeleton is one of 10 excavated from the site of a lost royal chapel at the castle. The skeleton of a woman was found near the knight.
Forensic anthropologist Professor Sue Black is leading the investigation.
It is believed the knight could have been killed during Scotland's Wars of Independence with England.
The castle changed hands several times and scientific tests have been used to work out whether the knight might have been a Scot, an Englishman or even French.
Efforts by Prof Black, of Dundee University, to find out more about the warrior's life and death will be featured in BBC Two's History Cold Case series on Thursday.
Richard Strachan, senior archaeologist with Historic Scotland, said the facial reconstruction gives a "powerful impression" of what the knight may have looked like.
"He was a very strong and fit nobleman, with the physique of a professional rugby player, who would have been trained since boyhood to handle heavy swords and other weapons and who would have spent a great deal of time on horseback," he said.
'Unusual' group
Historic Scotland, which cares for the castle, has announced it is commissioning further research to find out more about the 10 skeletons, which include two infants.
They date from the 13th to 15th Centuries and were found during preparatory work for a £12m refurbishment of the castle's Renaissance royal palace.
Biological anthropologist Dr Jo Buckberry, of the University of Bradford, is part of the team which will carry out the research.
She said: "Techniques have advanced a long way since the skeletons were discovered in 1997 and we can now tell much more about where people came from, their lifestyles and causes of death.
"This group is highly unusual, because of where and when the people were buried, suggesting that they might have been socially important and have died during extreme events such as sieges."
The facial reconstruction and other research results, will feature in a permanent exhibition due to open at Stirling Castle next spring.
History Cold Case - Stirling Man is being shown on BBC2 Scotland at 2100 BST on Thursday.