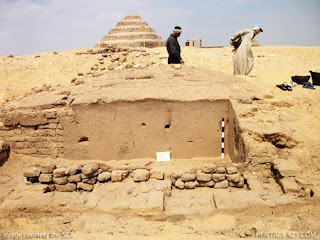 Archaeologists have discovered the 3,300 year-old tomb of Ptahmes, 19th Dynasty army leader and royal scribe, at Saqqara. The discovery of the tomb – dated to the second half of the 19th Dynasty (1203-1186BC) - by the Archaeological Faculty of the Cairo University was announced today, putting an end to a 300-year-old archaeological riddle.
Ptahmes' tomb is 70 metres long and contains numerous chapels. Dr Zahi Hawass commented its design is similar to that of the tomb of Ptah Im Wiya, a royal sear bearer who lived during the reign of Pharaoh Akhenaten, discovered in 2007 by Dutch archaeologists.
As Ptahmes was appointed to several official posts – including mayhor of Memphis, royal scribe and supervisor of the Ptah temple – Dr Ola El-Egezi, who led the excavations, concluded he must have been a prominent figure. The 19th Dynasty cemetery, located on the south side of the ramp of the Pyramid of King Unas, was reserved for the burial of ancient Egypt's top government officials.
The excavation revealed several stelae, amongst which an unfinished depiction of the deceased. It shows Ptahmes and his family before the Theban triad: Amun, Mut and Khonsu. Such a stela, El-Egezi said, reveals that during the second half of the 19th dynasty, the cult of Amun was revived.
The sand revealed several fragments of the statue of Ptahmes and his wife. A painted head depicting a female – most probably the mayor's wife or one of his daughters – was unearthed, along with a limestone statue that belongs to the deceased. The archaeologists also unearthed clay vessels, shabti figurines and amulets.
According to archaeologist Dr Heba Mustafa, part of the excavation team, the pillars of the tomb were reused for the construction of chapels during the Christian era. Part of its walls are severely deteriorated. Several pieces of the wall were found in the debris inside the tomb. These pieces were collected in order to be registered and restored. It is thought most of the damage to the walls was sustained when the tomb was first opened in the 19th century.
The location of the tomb of Ptahmes was last recorded in 1885 and artifacts from the burial site were taken to museums in the Netherlands, the United States, Italy and the Egyptian Museum in Cairo. Its location was soon forgotton, and Egypt's desert sands covered up the tomb again.
Ptahmes' sarcophagus is not yet located. Excavations to find the main shaft of the tomb – leading to the burial chamber with the coffin and funerary equipment – continue.
Saqqara, located 40 kilometres south of Cairo is one of Egypt's oldest burial sites, also known as the 'City of the Dead'. It is a 6 kilometres long necropolis and home to a great number of mastabas, rock-cut tombs and pyramids, amongst which the famous Step Pyramid of Djoser.
Earlier this year at Saqqara, French archaeologists discovered the burial chamber of 6th Dynasty Queen Behenu – wife to either Pepi I or Pepi II – and an Egyptian mission found a 26th Dynasty tomb, the largest rock-cut tomb ever discovered at the necropolis. Several archaeological teams are excavating at the vast site, amongst which the team of Dr Dobrev hoping to find Userkare's pyramid