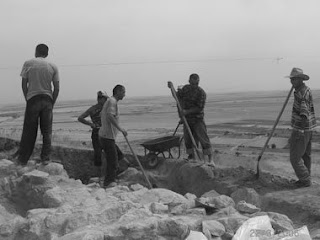 The archaeological excavations of the city of Tigranakert in Artsakh have got under way and will be due by August 25, the head of the Artsakh archaeological group of the Institute of Archaeology and Ethnography at National Academy of Sciences of Armenia Hamlet Petrosyan told Panorama.am. He said, Nagorno-Karabakh government has financed the 70-day excavations.
According to him, this year the group will be working in the acropolis, to open the northern wall, as well as they will carry out works in the Central district, the cemetery of early-Christian era.
In 2005 their group discovered the city of Tigranakert founded by the Armenian King Tigran the Great and in 2006-2009 they carried out archaeological excavations in this territory. This is the only residence named after Tigran to have been precisely discovered and undergoing archaeological observations.
HamletPetrosyan said the excavations revealed 100m of the walls of the city acropolis, the rock-carved bases of “Amratsvats” district, and the basilica of the Central district has been fully studied.
The castle dating back to early medieval times on the left bank of Khachenaget river has also been observed, he said.