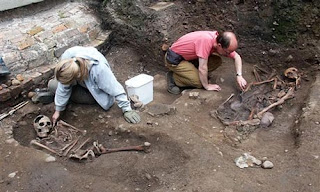 The haunting mystery of Britain's headless Romans may have been solved at last, thanks to scars from a lion's bite and hammer marks on decapitated skulls.
The results of forensic work, announced today, on more than 80 skeletons of well-built young men, gradually exhumed from the gardens of a York terrace over a decade, suggests that the world's best-preserved gladiator graveyard has been found.
Many of the 1,800-year-old remains indicate much stronger muscles in the right arm, a condition noted by Roman writers in slaves trained from their teens to fight in the arena. Advanced mineral testing of tooth enamel also links the men to a wide variety of Roman provinces, including North Africa, which was another a feature of gladiator recruitment.
The conclusions are consistent with York's importance in the Roman world as a provincial capital and major military base for years of campaigning north of Hadrian's Wall. Many senior generals and politicians held posts in the city and Constantine appointed himself emperor there in 306AD. Such distinguished residents would have required a high standard of social life, according to the York Archaeological Trust, which has supervised the excavations in Driffield Terrace.
Field officer Kurt Hunter-Mann said the accumulation of evidence now pointed to a gladiator graveyard rather than to a military suppression of aristocratic rebels by Caracalla, another emperor who visited York, as suggested by earlier theories.
Signs of respect accorded to the remains, including piles of grave goods for use in the afterlife, had appeared to support the earlier notion. The initial finds of some 60 skeletons also turned up evidence suggesting lavish funeral feasts, with beef, pork and horsemeat on the menu.
But accounts of gladiator burials make it clear that similar pomp accompanied the rites for many long-serving gladiators, who were comparable to modern football stars apart from their often bloody end. Decapitation was a regular conclusion to bouts and the coup-de-grace often came with a hammer blow to the head.
Other theories about the grave have included a pagan rite involving decapitation, or a pogrom against a minority group such as Christians, but evidence for either is lacking. Gladiators were brought into the debate in earnest three years ago, when the discovery of burials of arena combatants at Ephesus in Turkey revealed a similar combination of hammer blows to the skull and decapitation as at York.
The animal bite has also tilted the balance of the evidence, after a further 23 skeletons were found during excavation for a resident's patio. Hunter-Mann said: "It is one of the most significant items of the evidence accumulated. A large carnivore bite – probably a lion's but possibly from a tiger or bear – must have been sustained in an arena. The great majority of the skeletons are also male, very robust and mostly average height, which is telling along with the arm muscle asymmetry."
York appears to have held major arena events until as late as the fourth century AD, avoiding the decline into the spectacle known as Venatio, or the hunt, which saw cash-starved provincial governors provide deer and even rabbits in place of the exotic beasts associated with gladiator spectaculars.
Dr Michael Wysocki, senior lecturer in forensic anthropology and archaeology at the University of Central Lancashire, who has carried out recent tests, said: "We don't have any other potential gladiator cemeteries with this level of preservation anywhere else in the world. It is a unique Roman burial assemblage. Anthropologically speaking, the material is particularly significant because it includes such a broad spectrum of healed and unhealed injuries associated with violence.
"Nothing like the bite marks has ever been identified before on a Roman skeleton. It would seem highly unlikely that this individual was attacked by a lion or tiger as he was walking home from the pub in York 2,000 years ago."
Work is continuing on the remains and at the dig, which will be featured in a Channel 4 documentary, Gladiators: Back From The Dead next Monday (14 June). The discoveries add to the formidable Roman reputation of York, which has the remains of walls, tombs and a large civil settlement, plus a ghostly cohort of soldiers whose tramp through the cellars of the Treasurer's House by York Minster is the subject of centuries of claimed sightings.