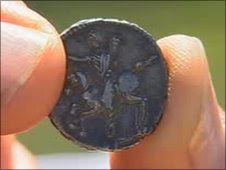 A Roman fort which has been discovered in Cornwall is challenging previous historical views about the South West.
Pottery and pieces of slag have been found at the undisclosed location near St Austell, suggesting an ironworks.
Experts said the discovery challenges previous thinking about the region's history as it had been thought Romans did not settle much beyond Exeter.
John Smith, from Cornwall Historic Environment Service, said: "This is a major discovery, no question about it."
'Crucial' find
Mr Smith said: "For Roman Britain it's an important and quite crucial discovery because it tells us a lot about Roman occupation in the South West that was hitherto completely unexpected.
"The other Roman sites we know about [in Cornwall] have occupation in the 1st Century AD, of about AD50 to AD80, and that fits in with what we know about Exeter.
"In finding the pottery and glass, it's saying the occupation is much longer and goes from AD60 up to about AD250, which turns the whole thing on its head.
"It certainly means a rewrite of history in the South West."
The site had previously been regarded as an Iron Age settlement, but the recent discovery of pottery and glass was found to be of Roman origin.
Archaeological enthusiast Jonathan Clemes discovered various artefacts by studying the earth after it had been ploughed.
He said: "You've got to know your pottery.
"If you come across a bit of pottery and you know what it is, it can tell you a great deal about the activity that went on in that area."
Following the discovery of the artefacts a geophysical survey of the site was conducted, which uncovered a fort, marching camp and various annexes.
Mr Smith said that prior to this discovery, it was believed that Roman forts had only been positioned close to the Devon border, because after settling for about 30 years, the Romans left the region for south Wales.
It will now be considered whether to excavate the area, or to leave it for a future excavation when techniques have advanced.