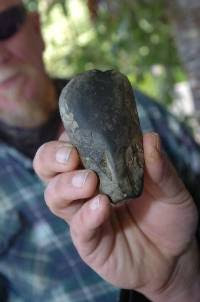 A stone age axe head, believed to be 7,000 years old, has been uncovered in Derry.
The artefact was found on freshly ploughed land on the banks of the River Foyle near Thornhill College. The suspected axe head was spotted by a man walking his dog in the area and he took the item home.
Local archaeologist Ian Leitch believes the item dates from the Mesolithic period or middle stone age and was around 7,000 years old.
And he believes the finds significant in terms of the wider archaeology of the area. "The axe head from Culmore suggests that there may be a mesolithic site on or near to the find spot. It may have been dropped or lost by its owner while out hunting on land near the river."
He added: "The stone axe head is made from mudstone, measures around six centimetres in size and is in quite good condition."
Mr Leitch paid tribute to the finder for alerting him to the find. He added: "It is important that such an artefact is reported and properly recorded."
Last summer archaeologists unearthed eight neolithic (new stone age) sites in Derry, some more than 5,000 years old.
The exciting discoveries were made during work on the new Maydown dual carriageway and included a pair of well-preserved 5,000 years-old Neolithic houses and 4,000 years-old Bronze Age burial places known as 'ring-ditches'.
The earliest known mesolithic site in Ireland was excavated at Mount Sandel (around 9,000 years old) on the banks of the River Bann in Coleraine in the 1970s.