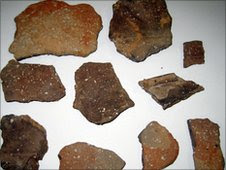 Some of the earliest pottery ever found in Britain has been unearthed on farmland on the Norfolk Broads.
The Neolithic flints and pottery shards dating back more than 5,000 years were found by the Oxford East Archaeology unit next to Ormesby Broad.
They include a loom weight for weaving cloth and a rare whetstone, used for sharpening tools, something normally only found in burial grounds.
The dig preceded the creation of 12 man-made silt lagoons for the broad.
They will hold sediment from the eastern arm of Ormesby Broad and are aimed at improve water quality and encouraging wildlife in a £120,000 project funded by the Department for Environment, Food and Rural Affairs (Defra).
'Rarely seen'
The excavation also uncovered an extensive Middle Bronze Age field system dating back to about 1,500 BC.
These systems were not thought to have existed further east than the Cambridgeshire Fens, indicating that such organised systems of farming were in use in the Broads earlier than previously thought.
Richard Mortimer, senior project manager at Oxford Archaeology East, said: "We have not only shown that contrary to virtually all published sources and expectations Norfolk certainly does have Middle Bronze Age field systems, but they have a complexity that has rarely been seen elsewhere in the county.
"It seems man, who dug out the Broads, was living and farming here earlier than we thought. It adds a new chapter to the Middle Bronze Age story for Norfolk".