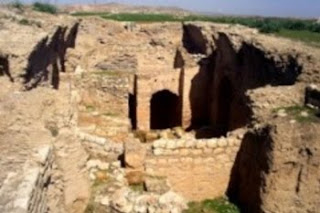 Syria (Damascus) - Archaeologists have unearthed an archaeological temple dating back to the Hellenistic and Roman eras /150 B.C/ in addition to a stone-made bridge dating back to the Roman era.
The findings were uncovered in the village of al-Bared River, 20 kms to the west north of Apamea, central Syrian Province of Hama.
Director of Hama Antiquities Department Jamal Ramadan said that the temple was built near a spring with a distinguished architectural style and a very huge size, adding that it was built of 210-centimeters long and 170-cenetimeters wide stones inscribed from their internal side.
The square-shaped temple includes a single hall. Studies showed that the temple was built over two different historical phases, the oldest of which is the Hellenistic Era as the temple was built according to the Hellenistic architectural style while the second stage is the Roman Era where many huge buildings were built.
The unearthed stone-made bridge dates back to the Roman Era. It consists of stone pieces. The rock bridge is 10-meter long and 3-meter wide. The bridge has three asymmetric arches.(SANA)