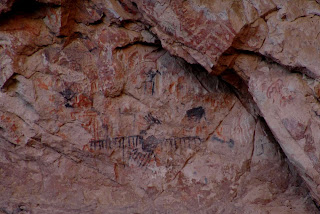 More than 2,000 rock paintings distributed in a natural canyon part of La Pintada Archaeological Zone, in Sonora, are being digitalized by experts from the National Institute of Anthropology and History (INAH). Designs reveal the world vision of ancient groups that dwelled this area 1,200 years ago, as well as at the colonization process.
It has been calculated that more than 2,500 graphics are found in the area, from which 70 per cent have already been registered, with the aim of creating an inventory of images for their study and for the preparation of a monitoring plan for their preservation.
Since 2007, a group of technicians headed by archaeological Manuel Graniel have been conducting the meticulous analysis and digital registration of the ancient manifestations distributed along 33 hectares.
“Research has revealed that La Pintada was an important space for diverse human groups, from 12th and 13th centuries’ hunter-gatherers to Seri, Yaqui, and Pima groups that used it as ritual space ritual between 17th and 18th centuries of the Common Era.
“The canyon represented an oasis because it stores rainwater, and it was used as a hide-out during evangelization, since it is a hard to reach place”.
Manuel Granier explained that for registration “we do a photographic panning on each surface with paintings and parting from a reticule system we unite the designs to get every detail, just as they are placed.
“This way, we are able to reproduce in large format the designs located in hard to reach places, for their analysis”.
Regarding images at rocks, the archaeologist part of Sonora INAH Center mentioned that those created 1,200 years ago represent local fauna such as deer, reptiles and birds; hunter-gatherers captured them with the intention of propitiating abundance.
During 17th and 18th centuries, facing hounding from colonizers, many natives took refugee in the canyon; they were also attacked by Spaniards, who were represented in paintings riding without the horse, in the belief that they would not attack natives, since they would loose power”.
One emblematic image at La Pintada is El Venado, one of the largest graphic representations, where a boy is riding a deer, scene of the Seri myth of the mighty boy.
Graniel detailed that analysis of paintings has allowed identifying 3 different styles at the Contact (with Europeans) Age; “by the limits of Seri, Yaqui and Pima settlements that came together at the canyon, and by descriptions made during the 17th century, we think they dwelled La Pintada 300 years ago.
“Styles were determined based on anthropomorphic images, since each group wanted to represent themselves differently”.
The archaeologist explained that different techniques confirm that not all paintings were created by a single group. Finally he commented that digital registration of rock paintings will be used to place large format pictures of designs placed in hard to reach places, for their exhibition.