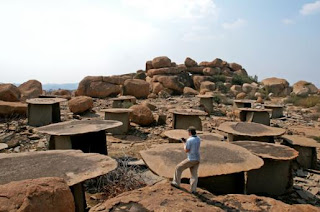 There's no clear path to Hire Benakal in the hills north of the Tungabhadra River in the southern Indian state of Karnataka. If you have to double back only two or three times on the way, you've done well. University of Chicago anthropology graduate student Andrew Bauer leads me through the thorns and boulders until we emerge on a high plain surrounded by ridges. He points out knee-high aligned stones and propped-up slabs that mark the edges of the site. As we navigate through it, we walk around a pile of house-sized boulders, and the massive scale of Hire Benakal, like a city skyline in the distance, becomes apparent.
On a gentle slope are scores of dolmens (megalithic tombs) resembling houses of cards—if playing cards were slabs of granite 10 feet tall and weighed 10 tons or more. The monuments were built over more than 1,000 years spanning the southern Indian Iron Age (1200-500 B.C.) and Early Historic (500 B.C.-A.D. 500) periods, and there are more than 1,000 of them across nearly 50 acres, from modest rock enclosures to mausoleum-like tombs.
Historical sources are vague, but Hire Benakal's existence may have been documented as early as the 1850s, and the site was first examined in detail by historian A. Sundara of Karnatak University in the 1960s. In 2007, Bauer conducted the first systematic survey of the site and its environs. It was long thought that the Iron Age people of India were nomadic, making a megalithic site such as Hire Benakal difficult to explain. But recent surveys, including Bauer's, have turned up many settlements, including two within a mile of Hire Benakal, that show the people lived in villages and practiced agriculture and pastoralism. “The site appears to be a principal center of culture in the region,” says Sundara.
Though visiting the site today is an eerie experience—akin to walking through a ghost town of stone—Bauer has concluded that Hire Benakal was more than just an isolated cemetery; it was also a part of an active landscape, and a place where social status and inequality first began to develop. “We really understand the site much more in context now, because I surveyed all around it,” he says. It was important socially and is absolutely overwhelming to the eye. If it were not so remote, Hire Benakal might be a national treasure.