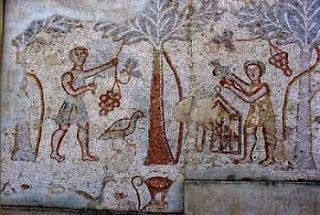 Daraa Province is a cradle of the most beautiful Mosaic paintings in Syria. They provide an important reference for researchers interested in Houran Region civilization in southern Syria.
Shedding light on the intellectual, economic, social and cultural development in the region, the number of mosaic paintings unearthed in Daraa Province reaches 25.Most of them are bath floors or murals in churches and royal palaces from Byzantine era.
Researcher Yasser Abu Nukta said the paintings reflect the aesthetic taste of its makers and give a hint about the various aspects of life in the 5th and 6th centuries.
The floral, animal and geometrical themes of paintings reflect the attempts of its creators to portray the nature of life and environment around. In some paintings, you can note that the human element is prevailing. Other works included documentary scripts on the region history, the researcher added.
Grapes, laurel and roses plants were the most depicted images while the animals included wolves, dears, horses, ducks and roosters. Other paintings portrayed aspects of traditional art and heritage particularly the straw plate.
Type, place, colors and stone sizes of the discovered paintings indicate the social and economic status of its inhabitants as a witness to life at that time
The small size of stones tells about creativity of its maker whose status enables him to afford high costs. The large size of stones indicates the economic deterioration in the Byzantine era and the decline of aesthetic taste in society which negatively affect the level of creativity.
Mosaic is the art of creating images with an assemblage of small pieces of colored glass, stone, or other materials. Most mosaics are composed of plaster and lime floor upon which the scenes to be portrayed are drawn with special colors and paints.
Basalt stones are usually used to give the black color, limestone for the white color, alabaster for red color, granite for brown and reddish brown, shells for yellow and glass for other colors. Animal bones can also be used.
The largest mosaic painting was discovered in Nawa City in Daraa Province. It covers an area of 3 m3 and 13 cm. (SANA)