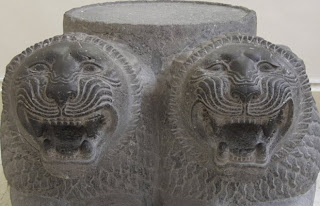 Every time archeologist James Osborne steps into the remains of the newly uncovered temple at Tell Tayinat, he can’t help but wonder about the people who walked those steps before him.
Did an ancient king mount them with great ceremony, proceeding into the most sacred chamber where very few could venture?
Did he sit on a dais and watch as priests consecrated clay tablets, perhaps even the one found last year by the University of Toronto archeological team here in southern Turkey?
Scientists are not supposed to speculate but Osborne can’t help it. The temple is “a spectacular find, a once-in-a-lifetime thing. I’m so lucky to be in on it. It’s a real windfall.”
The whole site has been incredibly rich, yielding hundreds of thousands of artifacts. But Osborne, who is studying for his doctorate at Harvard, has been focusing on a second temple uncovered in 2008.
The first temple, or adjacent monument, was uncovered in the 1930s by the renowned archeologist Robert Braidwood, who found a massive structure. But he overlooked another enormous structure nearby.
“He missed it by two metres,” says Osborne. “It’s crazy. It just shows you never know what’s under the ground.”
Osborne began on the site in 2008, reworking an area that Braidwood had already been over. Finally, Osborne suggested moving 20 metres east and hit the jackpot.
Although the team calls their find a temple, it may not have been a strictly religious building, in the way we use the word today.
So far, the team has found nine distinct layers in which the inhabitants just built over their ancestors’ work. The oldest dates to the 12th and 11th centuries BC.
The temple likely dated from this time, “without doubt one of the most important discoveries of the project to date,” according to the group’s field report.
So far, the project has only proceeded to the late eighth or early seventh century BC, and the tablet they unearthed last year dates from 672 BC.
It’s hard for scientists to visualize what the people of Tell Tayinat must have been like.
They can’t even be sure when people started living here, says the dig’s director, University of Toronto professor Tim Harrison. The earliest known date at this point is the early Bronze Age, when clans and rough communities were starting to form cities and states.
Clans fell away in favour of a political establishment led by kings. Harrison defines this sort of king as a ruler who can kill his own cousins and not upset the power structure — unlike in a clan, where murdering family members could turn everything upside down.
A central power in a burgeoning city would pool and redistribute food and other resources. Inequalities began to emerge, and so would a social hierarchy. People would specialize in their labour, with women looking after children, home and textiles, while men herded and worked the fields.
In the fourth or fifth millennium BC, another figure of power emerged: priests or cultic figures. They would conduct religious ceremonies and mediate disputes but, most importantly, they represented a voice to the gods.
“There was this magic, a liminal space (on the edge of visible reality), and priests stood at that gate and controlled access,” says Harrison.
For a thousand years at Tell Tayinat, people built temples upon temples, as gods fell or as communities were routed or moved on. “To me, it’s mind-blowing,” says Harrison.
People still believe today that the gods reside in a nearby mountain and that these gods have terrifying power.
What the first people here wore, what they ate, what they looked like, are all puzzles yet to be solved. More than 50 spindle whorls have been found, so clearly the people spun yarn and wove it into fabric. Soil samples indicate that seeds were being cultivated, presumably for cooking.
The team has found flutes and seen depictions of tambourines, so they know the inhabitants had music. Whether this was for worship or pleasure is not known.
All manner of clumsy figurines were discovered, which leads some to think that children made them, or maybe just inept adults.
Regardless of who made them, Harrison believes children likely played at the site, simply because it’s the nature of children to learn by playing.
He isn’t sure just when mankind decided to settle on the tell; his team hasn’t dug down that far yet.
Harrison shares Osborne’s fascination with the people who lived here.
“When I’m on the tell, I’m aware that everything has happened here, from childbirth to tragedy. Often we find fingerprints on pottery. I don’t know if they would admit it, but virtually everyone comes over to look.
"This is a tomb, a burial mound — a compression of human experience.”