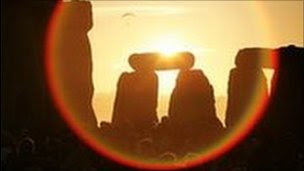 Archaeologists are carrying out a virtual excavation of Stonehenge to discover what the area looked like when the monument was built.
The multi-million pound Euro study will map the terrain and its buried archaeological remains with pinpoint accuracy, organisers claim.
The millions of measurements will then be analysed and incorporated into gaming technology to produce 2D and 3D images.
The research will take three years.
Equipment will be spread over an area spanning 4km this year and a total of 14km over the next three years.
Project leader Professor Vince Gaffney, from the University on Birmingham, said: "We aim to unlock the mysteries of Stonehenge and show people exactly what the local area looked like during the time the monument was created.
"The results of this work will be a digital chart of the 'invisible' Stonehenge landscape, a seamless map linking one of the world's most famous monuments with the buried archaeology that surrounds it."
Dr Christopher Gaffney, from the University of Bradford, said: "Rather than looking at typically small discrete areas we intend to cover the whole of the World Heritage Site.
"We will do this using emerging technology that allows us to pull large banks of sensors behind a quad bike and using real time GPS to locate the measurements."
The study is funded by the Ludwig Boltzmann Institute for Archaeological Prospection and Virtual Archaeology, in Vienna, and the University of Birmingham, and is assisted by the National Trust and English Heritage