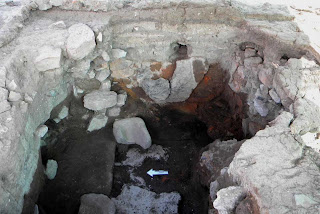 The finding of vestiges of a Prehispanic oven used more than 800 years to melt copper was registered by archaeologist of the The National Institute of Anthropology and History(INAH) at El Teul Archaeological Zone, in Zacatecas, during exploration that will leave ready this site to be opened before 2012.
As part of this work, during the first field season was accomplish the excavation of 2 pyramids and a part of a ballgame court, as well as several human burials that reveal changes in funerary patterns of ancient dwellers.
Archaeologist Peter Jimenez, co director of El Teul Archaeological Project, informed this at a conference at “Jose Luis Martinez” Bookstore in Guadalajara, Jalisco, where he made a balance of the first excavation season at the site.
“Finding the rests of the oven to melt copper is very important because it is the earliest found in Mexico and was used during Early Post Classic period, between 900 and 1200 of the Common Age”, added the researcher at his lecture “Advances of the archaeological rescue at El Teul”.
He described the structure of the oven made out of stone and masonry that presents rests of ashes and carbonized maize, used as combustible. This material will allow getting a more precise dating.
Jimenez explained that in its last occupation stage, El Teul was the religious center of Caxcan people, group that settled between 15th and 16th centuries. “It is considered one of the earliest sites in Mesoamerica, being occupied for almost 18 centuries, from 200 BC to 1540 AD”.
He commented that the second stage of exploration will take place in August 2010 in a place called El Sombrero, where the pyramids were found in an excellent conservation state.
“Both pyramids show traces that there was fire around them, and date from Epi Classic period (600-900 AD)”, declared, adding that a circular altar with a 6 meters diameter was located as well.
He mentioned that one half of the ballgame court was excavated, revealing 2 different constructive stages. The first one corresponds to Epi Classic period, and the later shows a new construction made out with fine masonry from the Early Post Classic period (900 to 1100 AD).
Regarding the human burials discovered, the archaeologist declared that 7 shift tombs were found, characteristics of the Western Mexico cultures, which correspond to the Late Formative period (200 BC-200AD).
Since burials are in profound pits so a magnetometer was introduced to identify sealed spaces under the surface. “This devise can give a lecture of how the tomb looks like, allowing us to work before excavation begins”.
The specialist mentioned that other human burials found in the place called Patio Hundido correspond to the “tumbas de caja” (box tombs) tradition: Individuals were placed in a flexed position inside masonry boxes, with offerings.
“These tombs date from 200-500 of the Common Era, and give account of changes in funerary patterns; passing from shaft tombs to box burials refers to the moment when cultures from Western Mexico begin to integrate with those from Bajio and Mexico Valley”.
Jimenez declared that not much is known about El Teul settlers before Caxcan people. Historian Wigberto Jimenez Moreno wrote that El Teul was a religious center of great territorial extension, where pilgrims from the Pacific Coast arrived every year with offerings.