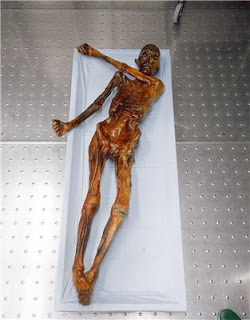 Ötzi has not been put on ice, on the contrary - things are hotting up for him! For the first time in his eventful history since his discovery almost twenty years ago, we now have access to the complete genetic profile of this world famous mummy. As a result the path is clear for an imminent solution to many of the puzzles surrounding the iceman.
Experts from three institutions have pooled their skills in order to map Ötzi’s entire genetic make-up: Albert Zink, Head of the EURAC Institute for Mummies and the iceman, together with Carsten Pusch, from the Institute of Human Genetics at the University of Tübingen and Andreas Keller from the bio-technological firm “febit” in Heidelberg. Together they have reached a historic moment in the study of the 5,000 year old mummy. The two scientists, Zink and Pusch, have been working together for some time and recently published, in collaboration with the Egyptian team led by Zahi Hawass, the latest findings on the life and the medical condition of Tutankhamen and his family.
Running a joint project with bioinformatics expert Andreas Keller turned out to be an ingenious stroke of luck for the two human biologists. Andreas Keller was able to make available the most up-to date sequencing technology, which the scientists then used to decode the millions of building blocks which make up Ötzi’s genome, and this in turn enabled them to achieve results which, using previous procedures, would have taken several decades to complete. They extracted a bone sample from the pelvis of the ice mummy, and with the aid of the revolutionary SOLiD sequencing technology from the “Life Technologies” company created a DNA library which contains by far the largest DNA data set ever recovered from the iceman.
This work on the iceman turned out to be a ground-breaking activity for the research team, as this was the first time that this newly developed technology was used on Ötzi. “We are dealing here with old DNA which in addition is heavily fragmented”, explains Albert Zink, who is entrusted with the care of Ötzi. “It was only by using the very latest technology with its low failure rate that we scientists were able to decode Ötzi’s DNA in its entirety within this short space of time.”
The most exciting part of their work is yet to come. The scientists are about to process the enormous quantity of bio-data now available to them which should contain the answers to a great many questions. Are any of Ötzi’s descendants still around today and if so, where might they be found? Can any genetic mutations be observed between earlier and present day populations? What conclusions about today’s genetic diseases and other prevalent illnesses such as diabetes or cancer can be drawn from the examination of Ötzi’s genetic make-up, and his predisposition to various types of ailments? What benefits can be derived from these findings for our own study of genetic medicine? Next year, we shall celebrate the 20th anniversary of Ötzi’s discovery. The scientists will mark this occasion by presenting their data analysis as well as the resulting conclusions. We are eagerly awaiting this event.