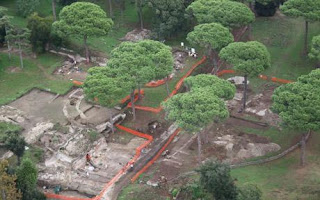 Scholars discovered the 100-yard-wide (90-metre-wide) canal at Portus, the ancient maritime port through which goods from all over the Empire were shipped to Rome for more than 400 years.
The archaeologists, from the universities of Cambridge and Southampton and the British School at Rome, believe the canal connected Portus, on the coast at the mouth of the Tiber, with the nearby river port of Ostia, two miles away.
It would have enabled cargo to be transferred from big ocean-going ships to smaller river vessels and taken up the River Tiber to the docks and warehouses of the imperial capital.
Until now, it was thought that goods took a more circuitous overland route along a Roman road known as the Via Flavia.
"It's absolutely massive," said Simon Keay, the director of the three-year dig at Portus, the most comprehensive ever conducted at the site, which lies close to Rome's Fiumicino airport, 20 miles west of the city.
"We know of other, contemporary canals which were 20-40 metres wide, and even that was big. But this was so big that there seems to have been an island in the middle of it, and there was a bridge that crossed it. It was unknown until now."
The subterranean outline of the canal was found during a survey by Prof Martin Millett, of Cambridge University, using geophysical instruments which revealed magnetic anomalies underground.
The dig, which is being carried out in partnership with Italian archaeologists, is shedding light on the extraordinary trading network that the Romans developed throughout the Mediterranean basin, from Spain to Egypt and Asia Minor.
The archeologists have found evidence that trading links with North Africa in particular were far more extensive than previously believed. They have found hundreds of amphorae which were used to transport oil, wine and a pungent fermented fish sauce called garum, to which the Romans were particularly partial, from what is now modern Tunisia and Libya.
Huge quantities of wheat were also imported from what were then the Roman provinces of Africa and Egypt.
"What the recent work has shown is that there was a particular preference for large scale imports of wheat from North Africa from the late 2nd century AD right through to the 5th and maybe 6th centuries," said Prof Keay.
The British team believe that Portus and Ostia would have been home to a large expatriate population of North African trading families and commercial agents, some of whom had their names inscribed on tomb stones.
Portus was the main port of ancient Rome for more than 500 years and provided a conduit for everything from glass, ceramics, marble and slaves to wild animals caught in Africa and shipped to Rome for spectacles in the Colosseum.
Work on the massive infrastructure project began under the emperor Claudius.
It was inaugurated by Nero and later greatly enlarged by Trajan.
The British team, funded by the Arts and Humanities Research Council, have uncovered the remains of a large Roman warehouse, a building identified as an imperial palace and a small amphitheatre which may have been used for gladiatorial fights, wild beast baiting and even mock sea battles for the private entertainment of emperors such as Trajan and Hadrian.
They also unearthed a dozen human skeletons and a 2nd or 3rd century white marble head of a bearded man which they believe may represent Ulysses.
Much less is known about Portus than neighbouring Ostia, and archaeologists hope that there are many discoveries waiting to be unearthed which could augment the understanding of ancient Rome's sophisticated trading network.
They expect Portus, which had to be abandoned after it began to silt up in the 6th century, to eventually rank alongside some of the world's best-known ancient cities. "Portus must be one of the most important archaeological sites in the world," said Prof Keay. "The great thing about Portus is that most of it has been preserved and there is much more to learn about the important role it played in Rome's success."