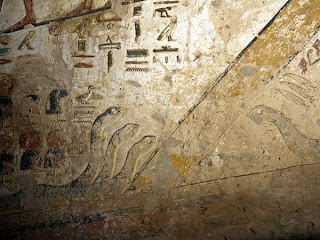 Snakes await at the foot of a steep tunnel in a scene painted on the walls of Pharaoh Seti I's tomb, above the real-life tunnel (file photo).


The image adds to evidence that the tunnel may have been planned from the beginning, according to Egyptian archaeologist Mustafa Waziri. The scene may refer to the ancient Egyptian Book of Hours, in which a snake guides good people into the afterlife, Waziri said.

While the rest of the tomb is covered with ornate reliefs, the tunnel is almost entirely blank. Archaeologists, however, did find red graffiti on the steps and what appear to be instructions from the architect: "Move the doorjamb up, and make the passage wider."