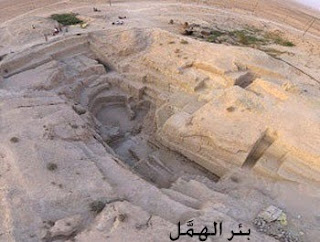 The American- Dutch archaeological expedition working at the site of Tal Om al-Mara, 50 kms to the east of Aleppo, has unearthed two archaeological tombs dating back to the Ancient Bronze Age 2800 B.C.
Several archaeological artifacts, a golden coin and ten skulls dating back to the same era were uncovered inside one of the tombs during the current season.
Chairman of the Excavations Directorate at Aleppo Department of Antiquities and Museums Yusuf Kinjo said that the unearthed tombs are located in the main area of tombs in Tal Om al-Mara, adding that they are the most important findings among the ten tombs discovered by the expedition up till now.
Kinjo said the tombs indicate that the city of Om al-Mara was part of the Methanic Empire that was destroyed by the Hittites later on. The expedition started to work at the site in 1994 where it has discovered four skeletons for animals similar to the zebra inside the central tombs.
The animals are thought to be hybrid about which Ebla inscriptions talks. The animals' skeletons indicate that they were only used for transportation and later in agriculture.
The American-Dutch expedition started its excavations for the current season on May 27 and finished its work on Wednesday. The findings will be displayed in Aleppo Museum. (SANA)