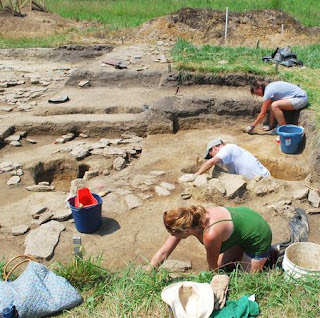 Just northeast of Cincinnati, Ohio, a sort of wooden Stonehenge is slowly emerging as archaeologists unearth increasing evidence of a 2,000-year-old ceremonial site.
Among their latest finds: Like Stonehenge, the Ohio timber circles were likely used to mark astronomical events such as the summer solstice.
Formally called Moorehead Circle but nicknamed "Woodhenge" by non-archaeologists, the site was once a leafless forest of wooden posts. Laid out in a peculiar pattern of concentric, but incomplete, rings, the site is about 200 feet (57 meters) wide. (See a picture of reconstructed timber circles near Stonehenge.)
Today only rock-filled postholes remain, surrounded by the enigmatic earthworks of Fort Ancient State Memorial (map). Some are thousands of feet long and all were built by Indians of the pre-agricultural Hopewell culture, the dominant culture in midwestern and eastern North America from about A.D. 1 to 900.
This year archaeologists began using computer models to analyze Moorehead Circle's layout and found that Ohio's Woodhenge may have even more in common with the United Kingdom's Stonehenge than thought—specifically, an apparently intentional astronomical alignment.
The software "allows us to stitch together various kinds of geographical data, including aerial photographs and excavation plans and even digital photographs," explained excavation leader Robert Riordan, an archaeologist at Wright State University in Dayton, Ohio.
The researchers had known, for example, that an opening in the rings; a nearby, human-made enclosure; stone mounds; and a gateway in a nearby earthen wall are all aligned.
But the model revealed that the alignment is such that, during the Northern Hemisphere's summer solstice—the longest day of the year—the sun appears to rise in the gateway, as seen from the center of the circle, Riordan said.
In much the same way, and on the same day, the sun appears to rise alongside Stonehenge's outlying Heel Stone, casting a beam on the monument's central altar. (See Stonehenge pictures.)
(For news on another Woodhenge, see "Stonehenge Didn't Stand Alone, Excavations Show.")
Trench Mystery at Woodhenge
Park officials using ground-penetrating technologies discovered the first holes at Moorehead Circle in 2005. Since then, Riordan's team's excavations have revealed hundreds more.
About 10 inches (30 centimeters) across and up to three feet (one meter) deep, the holes are thought to have held posts made from stripped oaks, hickories, and other local trees, Riordan said.
Each post probably stood about 10 to 13 feet (3 to 4 meters) above ground, and some were spaced only a few inches apart.
At the center of the innermost circle is a patch of cleared earth filled with reddish, burned soil and hundreds of broken pottery fragments.
In 2007 Riordan and his team discovered a series of trenches filled with ash and clay and capped with gravel and soil.
The trenches' layout mimics the pattern of the long-gone posts. And as with the posts, Riordan said, "We have no idea what [the trenches] were built for."
(Also see "Stonehenge Was Cemetery First and Foremost, Study Says.")
An Elaborate Construction
For the ancient Ohioans, constructing Moorehead Circle would have been a significant undertaking.
"They would have had to dig these holes, go get the trees, cut them, strip them, and carry them in," Riordan said.
Workers would have had to carry limestone rocks from about a mile (1.6 kilometers) away and up a 250-foot (76-meter) hill. The rocks would have then been broken up and placed in the pits to help keep the posts upright.
Not even digging the postholes would have been easy. Lacking shovels or picks, the Hopewell people dug with bones and sharpened pieces of wood.
And for all their work, the circle's creators must have known their monument wasn't built to last. After about ten years the wooden posts would have been largely rotted and ripe for replacement, Riordan said.
"This was an elaborate construction," he added. "All the effort that went into constructing it suggests it was the ceremonial focus of Fort Ancient for a time."