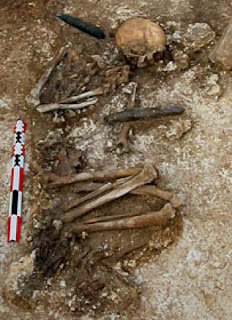 Stone Age doctors prove to be more medically advanced than we first imagined, as new evidence of surgery undertaken almost 7,000 years ago comes to light. Confirming advanced medical knowledge in 4900 B.C., the findings challenge the existing history of surgery and its development.
In a Neolithic site excavated in 2005 at Buthiers-Boulancourt, 40 miles south of Paris, scientists found the skeleton of an old man buried almost 7,000 years ago. Tests showed an intentional and successful amputation in which a sharpened flint was used to cut the man’s humerus bone above the trochlea indent.
Impressively, the patient was even anesthetized. The limb was cleanly cut off, and the wound was treated in sterile conditions. It has been common knowledge that Stone Age doctors performed trephinations (that is, cutting through the skull), but amputations have been unheard of up until now.
According to a research paper published in the Antiquity Journal, the macroscopic examination has not revealed any infection in contact with this amputation, suggesting that it was conducted in relatively aseptic conditions.
Scientists found that the patient survived the operation, and although he suffered from osteoarthritis, he lived for months if not years afterward.
According to the Daily Mail, researcher Cécile Buquet-Marcon said that pain-killing plants such as the hallucinogenic Datura were possibly used, and other plants such as sage were probably used to clean the wound.
The loss of the patient’s forearm did not exclude him from the community. His grave measures an above average 6.5 feet and contains a schist axe, a flint pick, and the remains of a young animal, which point to a high social rank.