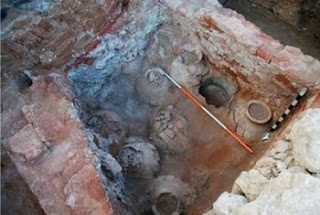 The Canadian archaeological expedition working at Tal al-Asharena in Hama Province unearthed an archaeological building and some pottery jars dating back to the Bronze Age (1550 – 1250 B.C.).
The building is made of raw mud bricks. The discovered pottery jars were used to store food, Head of Hama Antiquities Directorate Abd al-Qader Farzat said in statement on Monday.
Nearby the building, an Iron-Age floor (1200 – 750 B.C.) was also found, he added.
Meanwhile, the Syrian-Swiss excavation expedition uncovered a painting of a man wearing traditional clothes, holding his sword with a small bird at Qasr al- Heir al-Sharki (The Eastern Walled-Palace) in Palmyra, central semi-desert province.
Some plaster fragments and coins dating back to 1980s and 1990s were also discovered.
The uncovered fragments with geometric and floral decorations are parts of the ornamentation of halls, balconies, rooms and entrances, Director of Palmyra Antiquities and Museums Walid Asa'ad said.
Excavation works at the area to the north of the Grand Palace uncovered brick houses on stone pillars. These houses are divided into dormitory rooms, kitchens, bathrooms, stores, drawers and wells, he added.
The expedition started excavation activities at the Small Mosque to the west of Palmyra Theatre to study the building and its role in the Islamic Age. (SANA)